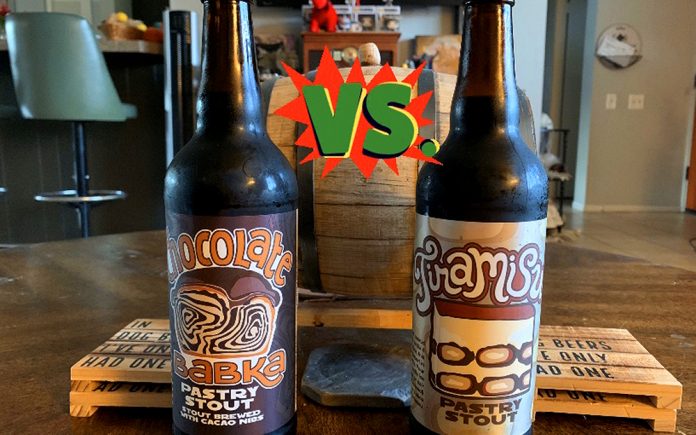 I might be exaggerating a little, but there are literally a gazillion grocery stores that I should look into buying my weekly groceries from instead of Trader Joe’s. Yet, there I was with a bottle of two-buck Chuck in one hand and a carton of two-buck cluck in the other (the cute nicknames given to wine and eggs on in-store fliers), contemplating if I really needed a bottle of their “Everything But The Elote” seasoning blend in my life (that’s 2.3 oz. of a very specific seasoning that I wasn’t ready to commit to). My cart was loaded with all of the strangely niche food items they have for sale, when a stroll through the beer section presented some curiosities I’d never seen before. Apparently, Trader Joe’s is making Annual pastry stouts a thing now. 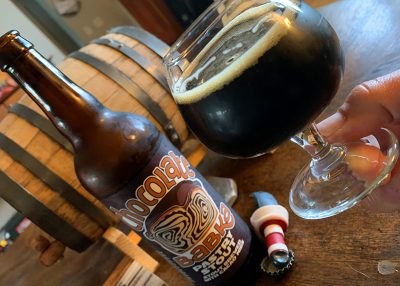 It started with their 2018 winter release of “Every Time – Buche De Noel” pastry stout, brewed with coffee and cocoa nibs by Campanology Brewing Co. The beer sold well enough (despite a Brewtality review where I referred to it as a total dumpster fire) to warrant the commission of two new stouts this winter season, both based on popular holiday desserts sold by Trader Joe’s.

A babka is a sweet, braided bread, filled with fruit, sweet cheeses, or in the case of the inspiration for this beer, chocolate. Trader Joe’s sells a chocolate babka cake that’s been praised for its help in taking what was once an ethnic, Jewish dessert, and making it a mainstream and trendy American treat. 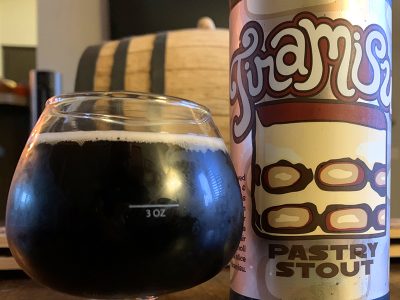 American audiences might be more familiar with the tiramisu; a coffee-flavored Italian dessert made with sponge cake, brandy, mascarpone cheese, and powdered chocolate. A staple in home economics classes, the tiramisu is a flavor that’s hard to get right in 5th period, let alone in a $3.99 beer, and that’s where the skepticism for Trader Joe’s pastry stouts weighs heavily. Can cheap beer do anything but disappoint? Pastry stouts are heavily adjunct laden by nature, with a high ABV to offset the cloyingly sweet nature of this category, it’s a beer that takes a skilled hand to do well. Campanology’s Buche De Noel stout was a sugary sweet and artificially flavored mess, did Trader Joe’s manage to create a beer that improves on past mistakes? I set about to answer these questions by pitting the chocolate babka and tiramisu beers against each other to see which one sucks less.

Appearance: The Chocolate Babka is a jet black, obsidian liquid that pours thick and rich, with a quickly dissipating khaki head of foam. The Tiramisu on the other hand is a less viscous, thinner bodied stout, pouring a murky brown. While the Tiramisu beer poured the less attractive of the two, it was actually the chocolate babka that left sediment at the bottom of my glass. Even with a cleaner pour and a longer lasting head of foam, it’s the babka beer that looks better in your tulip glass. EDGE: Chocolate Babka.

Nose: The tiramisu smells like a scratch and sniff sticker, so artificially on-the-nose that you could never mistake it for anything other than a coffee and cocoa flavored cake. You even pick up the sugary sweetness of sponge cake and the slight tartness of the mascarpone cheese, it really is a fantastically scented beer. By comparison, the chocolate babka is much less intense, smelling bready with notes of earthy cocoa, but lacking the pop that it’s sibling beer has. EDGE: Tiramisu.

Taste: The chemically enhanced flavors in the nose are also redolent in the tastes of these beers. Chocolate Babka is deep and rich with cloying chocolate cake batter being the prevalent flavor. Tiramisu, on the other hand, has a slightly more complex profile, with sugary sweet espresso, vanilla, cinnamon, and almond cookie all coming through, all as artificial tasting as Laffy Taffy. These lab-grown flavors aren’t completely off-putting, but it’s the taste equivalent of watching a CGI filled action-movie. The obvious artificialness of what you’re experiencing can be more distracting to some than others. EDGE: It’s a tie with neither flavor being significantly better than the other.

Mouthfeel: The tiramisu is full bodied the way you’d expect a stout to be, but it’s the silky mouthfeel of the Chocolate Babka that wins this category hands down. EDGE: Chocolate Babka.

Overall: I had several friends sample these beers with me, with preference being evenly divided. Non coffee drinkers were turned off by the Tiramisu, while the thick and viscous, intensely chocolate flavored Babka turned off others. The general consensus was that these beers were fine in 4 oz. small pours, but nothing about them warranted a second helping. But what is a pastry stout but a modern trend, a novelty beer designed to appeal to millennials looking for a new experience? Cheaply made and cheaply sold, these stouts did what they were designed to do, get people talking and tasting while introducing craft beer newbies to something different. The Chocolate Babka was the superior of the two, and a great value for $3.99. With any luck you might still be able to find these pastry stouts at your local Trader Joe’s, and are worth a curious taste for those wanting to try them for yourselves.