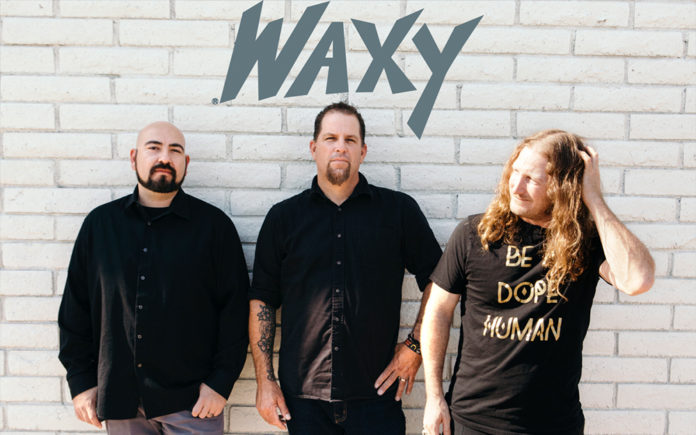 Congratulations to Desert Psychedelic Rock and Roll band WAXY for winning the 2019 ‘Best Album’ CVMA for the intense and personal masterpiece Betting On Forgetting. WAXY will be featuring some of the new album as well as other monumental works on Thursday, August 8th at Brick By Brick in San Diego, California and Saturday, August 10th at The Hood Bar & Pizza in their hometown of Palm Desert, CA opening for Dug Pinnick (King’s-X) and Robbi Robb’s (Tribe After Tribe) rhythmic jam band 3rd Ear Experience. Robbie Waldman (vocals & guitars), Jeff Bowman (drums) and Robert Bowman (bass) have further plans to support the new album across the pond and Canada before the end of the year!

Coachella Valley Weekly had a few beers with Waldman at another WAXY watering hole, The Red Barn, to dig deep about the album, their first CVMA, the SoCal shows and tour.

CVW: How are you and the band feeling about winning WAXY’s first CVMA for ‘Best Album’ for Betting On Forgetting?

CVW: “Tracy Dietlin and Phil Lacombe at CV Weekly are righteous folk. They are universally loved in this here town and beyond. The CVMAs are a gigantic undertaking and it’s truly amazing. A weekly paper is a never-ending juggling act with hard deadlines. To have such a huge event on top of that is mind blowing. We are so lucky to have them! So, winning the award for ‘Best Album’ was pure joy. They and the paper at large have always been a positive force and so supportive of WAXY and the award was a thrill to accept. We had never won an award before and for ‘Best Album’ no less. We felt very special to be recognized in that way.”

CVW: What are your thoughts about performing with 3rd Ear Experience and Billy Tsounis & The Amazing Androids at The Hood and Brick By Brick?

Waldman: “It’s the tale of two Robbies! Robbi Robb and I have been friends for years. We’ve played shows together in the past, but it has been a while. It’s always a great pleasure to share the bill with 3rd Ear and I’m very much looking forward to hearing Billy Tsounis! It’s going to be a heavy, electric guitar night no doubt, but with lots of soul. We all play modern Rock and Roll to an extent, but I really think of it as ‘soul music’. We all put ourselves into our jams. The listener or audience should have a better sense of who we are as a result of that sincerity; that’s what I attempt to do anyway. I’m trying to make friends up there, not hide behind an invisible wall. WAXY is also playing at Brick By Brick in San Diego with this crew and it’s always nice to play in faraway lands. Robbi was gracious enough to invite us to join them that night as well and it feels like a mini tour. Also, it’s great to get out of town in August!”

CVW: WAXY has a long-standing affair with The Hood. What can you say about the legendary venue?

Waldman: “The Hood is our home. WAXY has played there many times and it’s always rad. It provides a place for local as well as national/international touring acts to get down. It’s been through many changes over the years, but it’s still kicking and that’s way cool. Not sure what the desert community would do without it.”

CVW: We heard through the “desert music grapevine” that WAXY are preparing for an overseas tour?

Waldman: “Yes it’s true! WAXY will be going on the road for most of October 2019. We are playing in Holland, Belgium, Germany, Italy, France, the former Czech Republic and Basque Country in northern Spain. It’s very much a DIY string of shows but we are all excited to support the new album and see old friends. More details will follow.”

CVW: Jeff Bowman is your longtime supernatural drummer and he amazes at every performance. Robert Bowman is the newest member of Waxy. What does Robert bring to the WAXY table and how has it gelled?

Waldman: “Jeff is our backbone. Playing with him has been a dream. Not only is he a world-class drummer but he’s also a wonderful human being and friend. I’m very fortunate to play music with him. Robert is a supreme force of positivity! He’s been a friend for ages and the timing was right for us to start being creative together. Of course, he puts his heart into the music which comes naturally to him. Not only that but he’s a monster musician. He writes amazing songs and I can’t wait to get in the studio with him to make a new record. We are going to start after the tour just before the holidays. Robert’s work ethic is awesome, and we would not have won the CV Music Award without him. He’s a bright shining light in the WAXY world and I’m proud to call him my friend and bandmate. He gelled with Jeff and I after the first five minutes of playing.”

CVW: Tell us about Betting On Forgetting. Was there a preconceived notion of its musical direction?

Waldman: “The album was a massive undertaking. At the time, many things in my life were crumbling around me and I was powerless to stop it. I was deeply heartbroken by a love gone sour and crushed by another band I was in being destroyed by drugs, ego and whacked decisions. Not only that but my recording studio, Unit A, of nearly 20 years, was coming to an end. I was caught up in a web of lies, deceit, betrayal and loneliness. It was a real low point for me.”

CVW: That’s some heavy shit to get through. How did you overcome those challenges?

Waldman: “As difficult as it was to get out of bed some days, I was determined to finish the record. In many ways it was an act of defiance. I wasn’t going to allow depression and bullshit to rob me of doing what I love. It did take a lot of the fun away. Steve Feldman (Queens of the Stone Age, John Garcia, Fatso Jetson, Unida) engineered it and co-produced it and was really my saving grace. Steve is a musical genius and a dear friend. He was there from the beginning to the bitter end and the record would not exist without him. All the harmonies and whimsical interludes are his creations. ‘Feldy’ has decades of record-making experience and has been a major part of dozens of monster records like, QOTSA’s first record, Ian Astbury’s solo record, Kyuss, Desert Sessions, Fu Manchu, Abby Travis, Danko Jones and sooooooooo many more! He’s a true desert legend and beyond. I can’t say enough good things about him and very much look forward to working with him on the next record.”

Waldman: “I’m one of the most fortunate musicians. Another personal hero for me was my co-lyrist and longest living friend Brett Stadler. We’ve known each other since kindergarten and have been writing songs together for 20 years. He also understood my troubles and was there with me the entire way. He really encouraged me to let all those feelings out and scream at the top of my lungs if I had to. I just started to sing through a stream of consciousness while playing guitar or keys and he was right there with me. We’d have hours of words and music, hammering the melody into our brains and then hours of only the sound of our breath and pencils on paper. No one else on planet Earth would have done that with me. Brett and I love to create together, and he is a true appreciator of words. Language means something to Brett, and it is his instrument from which he creates. We are most definitely musical soul mates. Our approach was similar to everything else WAXY has done. We are always mining for a strong assortment of grooves with verity and then custom fitting them to melody and lyric. All we ever want to be is ourselves. If it feels good, we keep it. If it feels bad, we ditch it. If we aren’t sure we discuss it, break it down and look closer. If all else fails we clink our glasses, appreciate what’s around us and start fresh the next day.”

Check out one of our favorite WAXY songs: