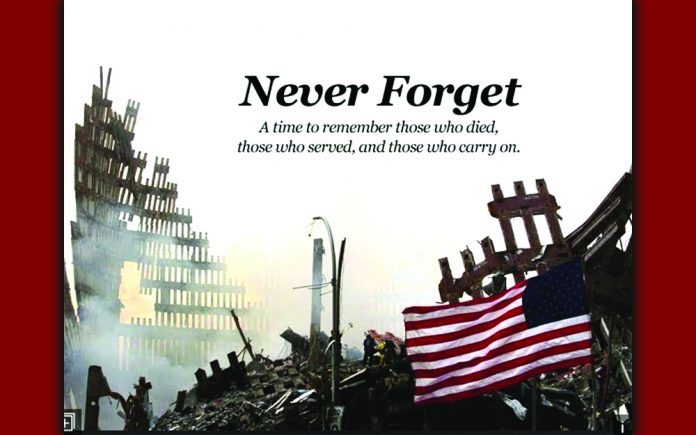 And Never Forget About Civility, Kindness and Respect…

Time flies as I get older. It seems like only months ago we were in remembrance of the 911 attacks on Sept 11th, 2001. I cannot believe another year has already gone by. The day this happened was a surreal day I will never forget.

I remember like it was yesterday. Just promoted to Interim Fire Chief, I was with several members from my dept. at the gym early that morning. It was not until the second plane hit the second tower that we knew this was no accident. I was immediately notified by my Fire Dept. Command Center to report to work ASAP. The United States was under attack!

The September 11 attacks were a series of four coordinated terrorist attacks by the Islamic terrorist group al-Qaeda against the United States on the morning of Tuesday, September 11, 2001. The attacks resulted in 2,977 fatalities, over 25,000 injuries, and substantial long-term health consequences and continuance of loss of life, in addition to at least $10 billion in infrastructure and property damage. 9/11 is the single deadliest terrorist attack in human history and the single deadliest incident for firefighters and law enforcement officers in the history of the United States.

With so many things going on locally, nationally, and globally, what happened September 11th, 2001, can move to the back of our minds. We are quick to forget, however, we cannot forget those that sacrificed their lives on this day.

The last eighteen months have also been surreal as well. The pandemic, civil unrest, assaults on law enforcement, the public, drought, catastrophic wildfires, hurricanes, U.S. military members killed in Afghanistan, to name a few. It makes me concerned for the future of our country.

This article has not changed much from last year’s article. Sadly, we will never be able to extinguish the desire of evil doers to commit their heinous and inhumane acts. They are here in our nation and externally as well, but we must take the fight to end both foreign and domestic terrorism as well as restoring civility among one another.

We often hear and discuss the economic deficit, however there is another deficit we are facing called “civility” https://lnkd.in/gMCA-XsD We are losing this quickly and as the saying goes “if you don’t stand for something, you’ll fall for anything!” Take a stand for civility, respect, and kindness. If you do not, our freedom as we know it will erode even more quickly. Reflect on the past eighteen months and you will see the division in this country.

Today and every day, we honor those who gave their lives on 9/11 and to those that died with disease and illnesses from that day. Each and every one of us should remain prepared to fight against evil. It is among us, and if not united, divided we will fall!

Sam DiGiovanna is a 35-year fire service veteran. He started with the Los Angeles County Fire Department, served as Fire Chief at the Monrovia Fire Department, and currently serves as Chief at the Verdugo Fire Academy in Glendale. He also is also a Senior Consultant for Cordico www.Cordico.com & Lexipol www.Lexipol.com