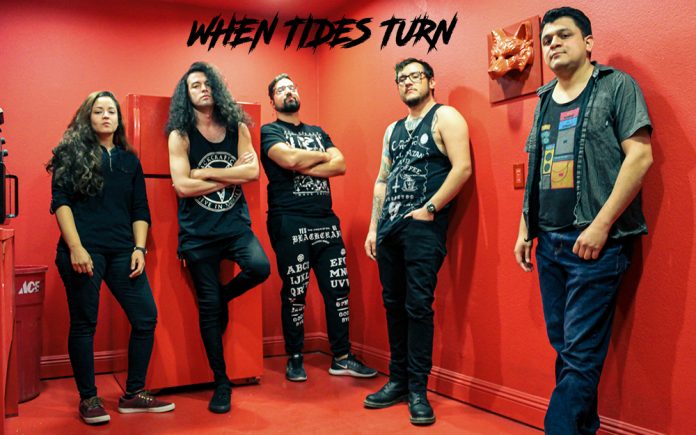 Considering all the ins and outs, ups and downs, sweat, tears and downright commitment it takes to make a band work, When Tides Turn is an aptly named group of metal musicians who have been throwing their all into this project throughout all of the changes that have been hurled at them over the past few years. From geographical distances to resuming rehearsals post-shutdown, the members of this band are as focused as they are enthusiastic about getting back to the business of making music and performing for their beloved fans.

This coming Sat, Dec 11th, When Tides Turn will be joining fellow desert metal groups, Murkocet and In the Name of the Dead at The Hood Bar in Palm Desert to rock our socks off in an attempt to bring us back to the heartfelt, blood curdling lifestyle of going to the metal shows that we miss dearly.

The band’s lineup consists of Ismael Garcia on vocals, Desiree McCaslin on drums, Darin Comorre on rhythm guitar and backup vocals, Thomas Cazares on lead guitar, and Josue Hernandez on bass. When Tides Turn as an entity, originally hailed from the state border town of Blythe, CA, which runs along the Colorado River. The name itself was intended to reflect the idea of the unassumingly strong undercurrent of the river itself. Throughout many life circumstances, happenstance and destiny, these artists have found each other. Over the past several years, they have established themselves as a relatively constant force on the Coachella Valley music scene and beyond. Just as comfortable performing on a big stage as they are at a backyard party…When Tides Turn puts on shows full of dynamic energy, charisma and heart. When you have been to one of their shows you know they have given it their all and your soul has been properly rocked.

I got to hang out with the band at their rehearsal space, Tracker Studios where we discussed their musical journeys as individuals, getting through this god awful pandemic and general band goals on the horizon.

CVW: Desiree, it’s often said that the drummer is the heart of the band and you exude that energy for sure. As one of the founding members of this group from back in the Blythe days….let’s talk about how you got into drumming and eventually came to become a staple of the CV metal scene.

McCaslin: “As far as the band is concerned, it basically started as friends from High school getting together to play music. We started booking gigs in our hometown which eventually led to us playing gigs here in the valley which got us affiliated with the local scene. We really fell in love with this scene and made friends with other bands. Actually, the first show we played out here was with Sleazy Cortez, In the Name of the Dead and Departed.

Garcia: “It was a backyard show somewhere off 4th St. and Grapefruit Blvd. in Coachella. They were making burritos out there and everything. It was awesome. A great place for a first-time gig out here for sure.”

McCaslin: “Just like Murkocet, who we will be playing with on Saturday, we know what it is like to drive across that freaking desert to rehearse. I did that for a while when I worked out there. We used to practice in Quartzite, AZ….TJ (Thomas Cazares) used to drive way over there to practice. It took a lot of commitment. We put a lot of miles on our vehicles for sure. We made sacrifices. It was all in the effort to get our sound out there and it’s been totally worth it.” 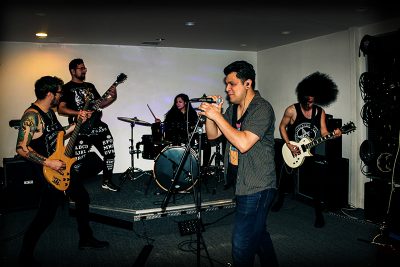 McClasin continues: “As far as how I got into music and drumming specifically, I would say that my dad always had a huge music collection….A lot of Motown and oldies in general. That influenced me a lot. I started playing drums around eleven years old. I had been banging on pots and pans for as long as I can remember. My mom went ahead and got me my first drum set when I was eleven. It was funny because at first, my parents argued over her getting me the drums because my dad didn’t think I was actually going to commit to playing them, but my mom didn’t back down. Fast forward….my dad still apologizes about that to this day so that’s cool. He’s really glad that my mom didn’t listen to him on that one and, like I said before, he was a big inspiration to me when it came to music in general.”

CVW: Darin, you play rhythm guitar and do some backup vocals. When did you decide to start playing music?

Comorre: “I started playing guitar around ten years ago. I grew up in Idyllwild, which you know is an isolated little town and there just wasn’t much to do. I was always drawn to music, so, when I was around ten years old my foster mom bought me a guitar for Christmas. I played around with it for a while and eventually got into metal. I remember watching Randy Rhodes and I just lit up like Christmas. Next thing you know, I was buying a Dimebag Dean guitar with every penny I could save up and I have been playing every day since.”

CVW: Ismael, you’re the frontman of this outfit. How did that happen?

Garcia: “It really started with a craigslist thing where someone was trying to start a band and that situation actually didn’t work out but, connections were made. At first I was contacted to possibly do vocals for this band and I wanted to but they were all in Blythe and I was here in the valley so it wasn’t going to work at that time. It didn’t really work out until the whole relocation and here we are.”

Garcia continues: “As far as getting into music, I picked up the trombone in school. I was always really interested in music and my parents always had music around. I first sang in a rendition of Grease when I was in High School. It was a lot of fun.”

CVW: That type of singing and music is a far cry from what you do now with When Tides Turn with all of the screaming and growling that’s required for your guys’ sound. How did that transition come about?

Garcia: “That is something I definitely had to develop on my own in my own time; starting out in the shower and whatnot. My mom is a Jehovah’s Witness so she wasn’t exactly thrilled with that style of singing so it wasn’t until I moved out that I really went ahead and started practicing more and developing that skill. She didn’t exactly see it as singing at the time but she has come around over the years and is very proud when she gets to see me perform.”

CVW: Thomas, AKA, TJ….you aren’t exactly a newbie to the local scene, right?

Cazares: “I was born and raised out here and went to Indio HS. I used to play in bands out here ten years ago. One of them was called, Here Comes the Chaos and another one was Darkness Awaits.  It’s always been metal stuff. I started playing guitar in high school. I started playing because there was a talent show…It was like a battle of the bands type of thing. I was really inspired by other kids who were doing it. I felt like, if they could do it, so can I. So I started playing guitar. My brother actually played guitar at the time and he was pretty good but, I wasn’t interested until that show at my school. But, I was lucky because I was able to use his guitar to practice and stuff. Eventually I got my own guitar and kept going.”

CVW: Josue, you’re the bassist but, you came in as a fan at first, right?

Hernandez: “I grew up out here. I had seen When Tides Turn a few times and was a fan. Desiree and I met because we ended up working together. When we met I was like, ‘Yo, dude! You’re that drummer!’ We started talking a lot and knew we were both into metal. Meanwhile, I am friends with the owner of Mas More Better Skate shop in DHS and I volunteered to help him get some shows going and do some promoting. I found out that When Tides Turn needed a bass player so I just put myself out there and said, ‘Hey, just in case…if you need me to jump in for a backup and help you guys out.’ I didn’t want to step on any toes. I just volunteered.”

Hernandez continues: “As far as getting into music… My dad played music for a long time. We are from Mexican descent and he played a lot of Mexican music. The accordion, actually and he was in a band. I know that I get a lot of my passion for music from him. I started playing guitar in middle school. Later, once I got into High school I decided that I really wanted to be a part of something, you know? That’s why I wanted to start a band and it was something that I kept trying to do but it just never worked out so I sort of let go of the idea after a while. Then all these years later…this happened. And it’s been super cool. Everyone has been so warm and welcoming and it feels good to be a part of it all.”

CVW: You guys have been through a lot of circumstances to be the band that you are today and now that situations are opening up for artists to do what they do again, what’s on the horizon for WHen Tides Turn?

McCaslin: “During Covid we all had to work our jobs and weren’t able to get together for a year. Now that we are back we are practicing more than we ever have and we are trying to focus on writing more than we ever have. We put in a lot of work. It takes a lot of dedication and passion and we are lucky that we mesh together so well. That helps a lot.”

When Tides Turn will be performing this Saturday, Dec 11th along with Murkocet and In the Name of the Dead at The Hood Bar in Palm Desert. Follow them at https://www.facebook.com/WhenTidesTurn