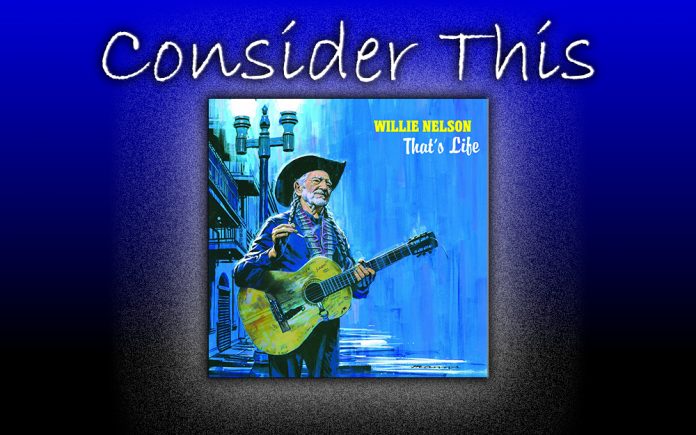 Willie Nelson is less than a month away from his 88th birthday, with a new album, “That’s Life,” just released, he’s back in the studio, writing and recording a follow-up to last year’s First Rose Of Spring record. He’s also co-written with Turk Pipkin entitled Letters To America that’s due in June. Pandemic-shmandemic, while you spent the year sprawled on the couch in your jammies, binge-watching Bravo television, Willie’s been a whirlwind of activity. Pretty good for a life-long stoner!

Willie doesn’t waste time. He was born in Abbott, Texas in 1933, along with his older sister, Bobbie, he was raised by his grandparents. He wrote his first song at age seven and three years later, he was fronting his own band.

After high school, where he excelled at baseball, basketball and football and raised pigs as a Future Farmer Of America, he joined the Air Force. Following a medical discharge he became a disc jockey. After stints at radio stations in Oregon and Vancouver, Washington, he returned to Texas. There, he DJ’d by day and plied his trade as a musician at night. He first achieved notoriety as a songwriter. He sold two of his earliest songs, “Family Bible” and “Night Life” to a local musician for a combined total of 200 bucks.

By 1960, he had moved to Nashville and secured a publishing deal. Heavy-hitters like Faron Young, Patsy Cline and Ray Price hit #1 with Willie compositions like “Hello Walls,” “Crazy” and “Night Life.” But he was a performer at heart, and remained intent on playing his own music. His debut, And Then I Wrote, arrived in 1962 and was a moderate success.

Rather quickly, Willie fell in with simpatico singer-songwriters like Kris Kristofferson, Dottie West and Waylon Jennings. For most of the ‘60s, Nashville was a sea of big hair, sequins and rhinestones. Willie and his pals eschewed the glitter and glamor, opting instead for jeans, work-shirts and increasingly longer hair. The Country Music establishment viewed them as outlaws and outliers.

Although songwriting was his bread and butter, artistic success continued to elude him. In 1975, after his Ridgetop, Tennessee ranch burned to the ground and his second marriage ended in acrimony, Willie pulled up stakes and returned to Texas, specifically, Austin. A college town and one of the few liberal enclaves in the Lone Star State, it allowed Willie the freedom to let his long hair flow and his freak-flag fly.

He began hosting an annual July 4th concert/picnic that found rednecks coexisting peacefully with Hippies. Willie began to find his footing, artistically and commercially. Innovative records like Shotgun Willie, Phases And Stages and Redheaded Stranger became genuine hits. Suddenly Country Music and the world at large were embracing this self-proclaimed outlaw. Pretty soon he was performing on “Saturday Night Live” and receiving invitations to President Jimmy Carter’s White House (where an insider invited him to the roof, where he promptly blazed a joint).

In 1978, Willie released Stardust. His 22nd solo album was a salute to Jazz favorites and Pop Standards that fully introduced him to the mainstream. Songs like “Blue Skies” “All Of Me,” and “Moonlight In Vermont” featured his sui generis phrasing and gritty guitar work. His version of “Georgia On My Mind” netted him a Grammy for Best Male Country Vocal.

In no time, Hollywood came calling. Willie stole the show in movies like “Electric Horseman” and starred in “Honeysuckle Rose,” the latter being a thinly veiled version of his own life. Throughout the ‘80s, he recorded myriad albums, toured non-stop as both a solo artist and as part of The Highwaymen a Country super group featuring old compadres like Johnny Cash, Waylon Jennings and Kris Kristofferson.

The party almost ended in 1990, when the Internal Revenue Service seized his assets, claiming he owed the government millions of dollars in back taxes. Turns out, his shady accountants hadn’t paid his taxes for years. To satisfy his debt, he released Who’ll Buy My Memories, a two-CD set of stripped-down songs featuring only Willie, and his trusty guitar, Trigger. Despite the haphazard, willy-nilly execution, the album went on to pay down 3.6 million dollars of his debt. Selling off what was left of his assets (to fans who promptly returned his keepsakes), and extensive touring put him back in the black.

By the 21st century, Willie had settled down with his fourth wife, Annie. Splitting his time writing, recording, touring and raising their sons Lukas and Micah, (all told, Willie has fathered seven kids), the family shuttled between their Texas homestead and their Maui retreat. An environmental activist and cannabis connoisseur, his tour bus runs on a biodiesel fuel created by a company he and Annie own. A longtime advocate for LGBTQ rights, he recorded a version of the Ned Sublette song “Cowboys Are Frequently, Secretly Fond Of Each Other” for the film, “Brokeback Mountain.”

Willie has infamously burned the candle at both ends for nearly ¾ of a century. Despite a predilection for wine, women, weed and song, he has outlasted many of his friends and contemporaries. Sadly, he has had to say goodbye to running buddies like Johnny Cash, Waylon Jennings, Ray Price, Merle Haggard, Leon Russell, and most recently, John Prine and Charlie Pride. To paraphrase Curtis Mayfield, Willie keeps on keeping on, over the years his records have run the gamut from dazzling to middling to not-so-hot. But his latest, That’s Life, is pretty terrific.

A sequel of sorts to 2018’s Grammy-winning My Way, this, his 95th(!) studio album, also pays tribute to the late, great Frank Sinatra. It gets off to a ring-a-ding start with “Nice Work If You Can Get It”, originally found on the 1956 record, A Swingin’ Affair. A cheerful piano intro dovetails effortlessly with buoyant guitars and a breezy beat. Willie’s matchless phrasing puts him just ahead or behind the beat. His manner, per usual, is laid-back and relaxed as he extols the virtues of marriage; “Loving one who loves you, and then takin’ that vow, nice work if you can get it, and if you get it won’t you tell me how.” Steel guitar weaves in and out of the instrumental tapestry, unspooling a jaunty solo on the break that’s half-Hillbilly, half-Hawaiian.

Of course, Willie cherry-picks several well-known Sinatra songs, but he also includes a couple of deep cuts that Ol’ Blue Eyes aficionados truly treasure. Take “Cottage For Sale,” which originally appeared on his 1959 Torch song collection, No One Cares. A buttery string section is bookended by twinkly piano notes, willowy guitars and a meandering rhythm. Willie mines the melancholy baked-in to lyrics like “A little dream castle with every dream gone, is lonely and silent the shades are all drawn/And my heart is heavy as I gaze upon a cottage for sale.”

Then there’s “Learnin’ The Blues,” from Frank’s first summit with Count Basie in 1962. Thanks to Neil Hefti, their arrangement was so tight, you could bounce a quarter off of it. Willie augments the sleek and syncopated groove with Tropical guitars and a loping, Western-Swing rhythm. Whereas the Chairman’s croon was supple and mellifluous, Willie’s vocals are ragged and roughhewn

Both “I’ve Got You Under My Skin” and “Luck Be A Lady” are slightly recalibrated. On the former, time signatures shift, locking into a relax-fit Rhumba. Here, Willie’s mien is easy-going and authoritative as he leans into Cole Porter’s sophisticated wordplay; “I’d sacrifice anything come what might, for the sake of having you near, in spite of the warning voice that comes in the night and repeats, repeats in my ear ‘Don’t you know little fool, you’ll never win, use your mentality, wake up to reality’/But each time I do, just the thought of you makes me stop, before I begin, ‘cause I got you, under my skin.”

The best tracks here shine a spotlight on Francis Albert’s deft and disparate choice of material. “You Make Me Feel So Young” swings gently. A Rat Pack of horns sway over walking bass lines, pithy guitar riffs and complex piano chords. Willie’s nuanced vocals extol the salubrious effects of new love; “You make me feel so young, you make me feel so Spring has sprung, and evert time I see you grin, I’m such a happy individual.” Frank began his career in Tommy Dorsey’s band. In those days, most Big Band singers recited the lyrics in a rote, detached manner. Frank was credited as the first vocalist to invest his whole heart and soul into each word, as though each emotion was his. Willie follows suit on the latter. The mood is intimate and reflective as a fluttery string-section lattices over saloon-style piano. Vocals are front and center as lyrics parse the vagaries of romance; “In the wee small hours of the morning, while the whole wide world is fast asleep, you lie awake and think about the girl, and never ever think of counting sheep.” Harmonica and piano intertwine on the break.

Finally, on “I Won’t Dance,” Willie is the reticent rogue to Diana Krall’s sophisticated lady. The pair spar over tripping the light fantastic, he insists it will lead to romance, she demurs a dance is just a dance. Airy strings are matched by Diana’s trademark rollicking piano style, percolating horns and a buoyant beat. A sleek sax solo on the break gives the proceedings an extra kick.

Other interesting songs include “Just In Time” which pares down to a sharp Jazz combo featuring sparkly piano, upright bass, brushed percussion, searing harmonica and Willie’s crisp vocals. Although “That’s Life” has been done to death, Willie manages to inject something fresh by employing a Country-flavored arrangement. The instrumentation is anchored by Honky-Tonk piano, chugging guitars, Hammond B3 colors, woozy harmonica and weepy steel guitar.

On the album’s closer, he circles back around to “A Swingin’ Affair” for a version of “Lonesome Road.” Stripping away the brass accoutrements that almost overpowered Frank’s rendition, Willie opts for a Gospel-inflected arrangement. Hammond B3 swirls around consecrated keys, Bluesy guitars and an irresistible handclap beat. Although it’s “Weary totin’ such a heavy load, trudging down that lonesome road,” Willie takes us to church. It’s a soulful and sanctified finish to an elegant effort.

That’s Life debuted at #1 on Billboard’s Jazz chart. As he accelerates toward his ninth decade, Willie shows no signs of slowing down. Equal parts expansive and intimate this album is an affectionate tribute to a hero and a friend.