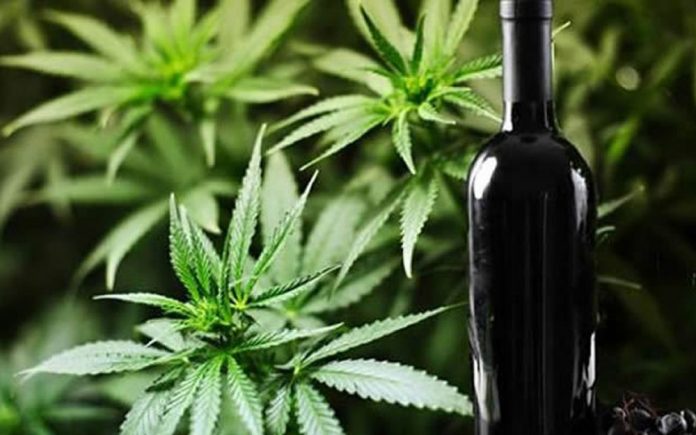 Something is happening in the great Golden State of California. For so long, the vino cognoscenti took pride in the capitalistic fact that the crop worth of the most valued wine vineyards, especially in Napa County with their prized Cabernet Sauvignon, fetched up to $40,000 per acre per harvest.

Then the passage of California Proposition 64 in 2016 legalized the commercial and recreational growing of cannabis. Now rush to the present time, and the agricultural business sees that an acre devoted to cannabis can easily yield a crop worth in excess of $1 million—a Golden crop indeed!

Hard to believe, but it’s been almost four years since this column joined in the entire CV Weekly publication during the week of August 16, 2017, on the subject of cannabis. https://coachellavalleyweekly.com/weed-wine-bar.

Wine Spectator Editor and Publisher, Marvin R. Shanken, recently commented, “Before our eyes, the United States is welcoming cannabis…on a level that Americans in decades past could not have imagined… As the leading producer of cannabis in the U.S., California is on track to fill that demand. And the expansion of this crop into California’s wine country regions could spark the state’s biggest transformation since the emergence of the premium wine industry.”

Shanken continues, “For many, the potential rewards are too great to ignore. Complicating matters, however, is that California counties have been left largely on their own to legislate how and to what degree they will embrace or resist cannabis, for which regulation includes cultivation, manufacturing and sales… regions [are] now grappling with the kinds of conflicts that can arise between growers of grapes and growers of cannabis. When cannabis and wine grapes are raised in proximity, water usage, pesticides drift between crops and even odor contamination of grapes become concerns.”

“With the arrival of cannabis farms in premier California wine regions, some see opportunity, while others battle unwanted neighbors”, so says wine columnist Aaron Romano in his recent Wine Spectator article on the subject.

Romano continues, “Adding to cannabis’ momentum is that many see it as a bankable addition to agriculture in regions where wine grapes dominate. Starting costs and plantable land prices (relative to regions) are comparable for both industries, yet cannabis gives a much faster return and earns significantly more.”

So there we have it! It’s always been interesting to see the new wine folk’s reaction to the fact that once a vineyard has been planted, it takes well into four, five, six years to harvest a crop that is mature enough to produce a good wine. I don’t know exactly—perhaps you do, but it seems that the cannabis weed can produce a viable crop a lot sooner than wine grapes.

Finally, the annual water usage per crop acre for wine grapes averages between 65,000 to 160,000 gallons; for cannabis, the estimate amount of water usage is 1 million + gallons. Average harvest time in wine is August to October; the cannabis harvest is from September to November.

In his Wine Spectator article, Romano points out that, “cannabis isn’t getting a warm welcome from all grape growers. Clashes are escalating over natural resources, land use, zoning, crop compatibility and tourism.

“With each county left to legislate its own rules, regulations covering cannabis vary greatly. Santa Barbara County has been in the spotlight for unchecked development of cannabis. Santa Barbara holds more than 1,300 state licenses to grow cannabis, making it second only to Humboldt County in the far north, where wine grapes are not widely grown.”

I hear personally from my Napa wine friends that cannabis cultivation is constantly being fought—and is currently banned. But it’s like a finger attempting to hold a damn back. Expect change soon in that county. Indeed, American Canyon, one of the so-called five cities of Napa County pursuing change, has been awarded its first license of indoor cannabis cultivation.