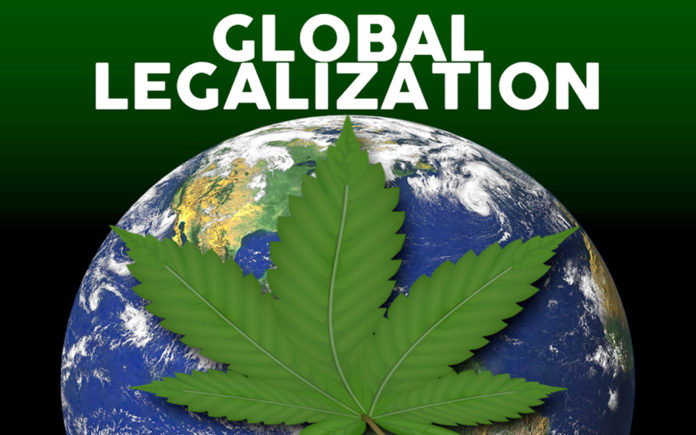 The Americans for Safe Assess (ASA.org) held its fifth conference in April 2017 and shared how the world is on fire with discussing, cultivating, producing, regulating, researching and using medical cannabis (MC). The U.S. Government continues its 80 years of lying to the public, manipulation by the media and the pharmaceutic companies, and research with contaminated government grown cannabis. It’s time to end the discriminatory prohibition of this miraculous plant. The public is taking the government kicking and screaming into the real world.

Let’s identify all the countries in the world that now have some form of legalization. First let me identify a controversy between CBD from hemp which has less than 1% TCH and whole plant cannabis which has various ratios of CBD and THC. Hemp is a cousin of cannabis. It gives us fiber, plastics, clothing, beauty products etc. CBD oil produced from hemp is very inexpensive and thus it is more readily available in poorer countries where the populace is not into the 2,000 strains of the whole cannabis plant. Hemp CBD may not work for you but it’s working in many of these poor countries.

The International Cannabis Cannabinoid Institute (ICCI) detailed at the conference progress in the European Union. Portugal, Spain, Germany, Ireland, Great Britain, Denmark, Poland, Greece, Italy Croatia, the Czech Republic all have, or are in the process of, legalizing some form of MC. The biggest impetus is for children with intractable seizures, or for pain due to breast and lung cancer.

Many EU countries are waiting for Germany to design the regulations because Germany is the biggest country with 80 million citizens. Italy licensed the army to be the only one to cultivate cannabis. Most countries distribute only in pharmacies except for The Czech Republic. The UK already reclassified cannabis from Schedule I to a Schedule II. The hemp crop was developed by the French who are the largest cultivators. Framers grow it everywhere. But the problem is they have no regulations on testing, cultivation, quantity or distribution. Buyer beware. All agriculture in the EU is subsidized.

South America has Columba, Uruguay, Mexico, Argentina, Venezuela, Ecuador, Peru, Brazil, Paraguay, and Chile, developing, in some form or another, legalization of MC for specific diseases. Again most of the drive has been the parents of children with intractable seizures. Venezuela limits the quantity, Argentina provides it free of charge for those enrolled in the program. Uruguay provides it through the pharmacy and charges $1.30/gram, (U.S. average is $20/gram). Every country has a patch work of regulations: distribution limits, plants/person, plants/farmer, government distributes, pharmacy distributes, etc.

Jamaica made MC popular with their national song by Peter Tish. MC is legalized for medicinal purposes. Their law also expunges the record of anyone incarcerated for an ounce of cannabis. Certain categories of people can farm the hemp, and they support research.

An emotional story came out of Mexico this year. One hundred thousand people were killed due to the drug war, consequently less than 30% of the Mexican population was in favor of legalizing marijuana. Raul Elizalde, the parent of Alina, who has intractable seizures, became the hero of Mexico’s children with his activism. His efforts resulted in the Mexican Congress overwhelmingly approving, in June 2017, the cultivation production and use of cannabis with less than 1% TCH (hemp CBD). Now 80% of the Mexican population are in favor of legalizing MC.

Mexico is now importing RSHO-X a hemp based CBD made in America. Hemp based CBD is acquiring an improved reputation over the whole plant enthusiasts. The best news is that Cory Booker (D-NJ) has introduced the Marijuana Justice Act which mimics Jamaica (see above) a law to declassify cannabis. Go to his Facebook page to see the video. There is also a petition on the Whitehouse.gov site to ask the Trump administration to declassify cannabis. Please go to: https://petitions.whitehouse.gov/petition/resolution-support-de-scheduling-cannabis Petitions on the website must receive 150 signatures to be available to the public, then must receive 500,000 signatures for the petition to be put on the President’s desk. P.S. I don’t have space to cover the rest of the world: Israel, India, etc. etc.