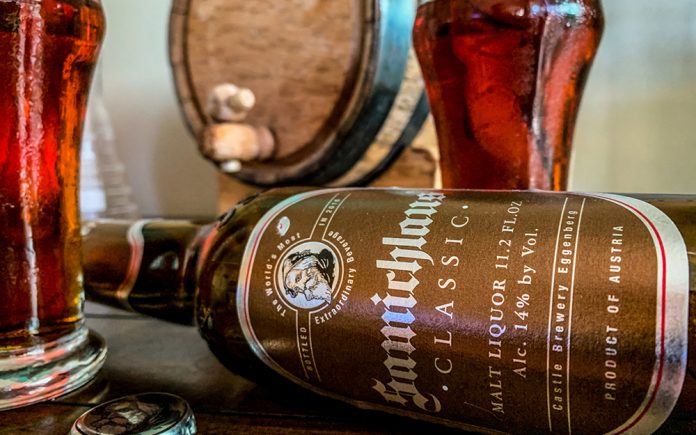 Maybe it was living in an economically depressed town, maybe it was growing up a teen in the mid-90s with the influence of gangster rap; hell, maybe it was just the flavor of it all, but my friends and I used to drink a bit of malt liquor. We were all around 19 years old, but we had a buddy who was old enough to purchase alcohol, and we’d pool all of our money and have him buy cases of Mickey’s for us. Mickey’s was great, it came in these little grenade shaped bottles, and there were these cryptic puzzles under the cap, like some alcoholic’s version of Bazooka Joe bubblegum. To us, drinking from Mickey’s wide mouth bottles was much more distinguished than drinking “Olde English” out of those 40 oz bottles like my juvenile delinquent younger sister and her friends did. They didn’t even bribe someone older to buy their booze for them, Roxy and her group would just steal their malt liquor. My friends and I were obviously much more refined, and we’d sip our contraband booze while ruminating about our younger sibling’s lack of taste (note: underage drinking is illegal and is not condoned. Just think where I’d be in life if I had some guidance and didn’t glorify rebellious subcultures. That being said, no regrets).

In the United States, a malt liquor generally refers to a strong lager in which sugar, corn, or other adjuncts are added to the malted barley to boost the total amount of fermentable sugars in the wort. This in turn boosts the ABV% of the drink without making it any fuller or sweeter, giving you a potent, yet cheaply made drink. Malt liquor can come across as sweet, and that is because of the exceedingly low bittering of many brands. Mega breweries don’t bother using whole hops or even hop pellets, they create too much waste and extra labor, so instead, hop extracts are used for bittering. That hint of bitterness you get in every sip of Pabst Blue Ribbon? That’s hop extract. Malt Liquor recipes call for even less hop extract than a PBR does, which is why malt liquors come across as sweeter than lager beer.

It’s been over two decades since my derelict teens, but I still enjoy tasting a malt liquor every now and then. I actually purchased a 40 oz bottle of Olde English a few years ago, and was surprised at how easy it was to drink (before it got warm anyway). Just the other day, I was browsing the import isle of my local bodega when I saw the most curious bottle. The label said “Samichlaus Classic,” in gothic font, with the words “MALT LIQUOR” beneath it. I peered closer. This malt liquor happened to be 14% alcohol by volume. 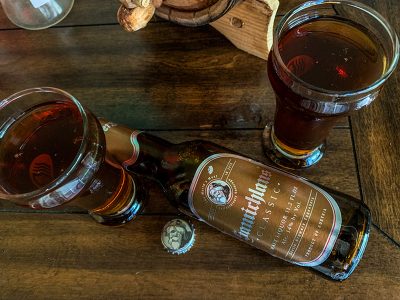 Samichlaus, the Swiss-German name for Saint Nicholas, is a confusing beer to categorize, even for the company that creates it. According to the Schloss Eggenberg, this drink is brewed once a year on December 6th, and aged for 10 months before bottling. The brewery website categorizes it as a barleywine, but is regarded industry wide as a very strong doppelbock (a strong, dark lager). The confusion in style comes from the fact that at 14% ABV, it is above style guidelines for both barleywine (maximum ABV is capped at 12%) and Doppelbock (10% ABV max) styles. In 1980, Samichlaus was actually regarded by the Guinness Book of World Records as the world’s strongest beer (since surpassed many times over). Due to alcohol laws in Austria, lager beers with exceedingly high alcohol content are categorized simply as malt liquor. Unlike American malt liquor, Samichlaus is all-barley, and does not contain extra fermentable sugars.

Holy shit, I had to have it. I had to review it. I had to write about it. And I was making my (decidedly non-malt liquor drinking) girlfriend try it out with me.

APPEARANCE: Garnet; brownish-red in the center of a glass, going almost black around the edging. Velia peers deeply at it and noted that it almost reminded her of Coca-Cola. “It’s got a rich, caramelly color”, she noted. A thin, white head of foam dissipated quickly, leaving no lacing.  Me: 5/5 Velia: 5/5

NOSE: I pick up a complex array of scents. Cherries, plums, dark fruit, yeast; toast with fig jam. To Velia, it’s reminiscent of something she’s had before, but she can’t remember what. To her it smells of citrus, lemon, sourdough. Me: 5/5 Velia: 5/5

TASTE: The first thing that comes to mind is cherry cough syrup. The best cherry cough syrup I’ve ever had. Lightly medicinal, sweet, warming the throat and chest as it goes down, softly bitter at the finish, fruity aftertaste with no harshness, no solvents or fusel notes. To Velia it’s very sweet, syrupy. It reminds her of root beer. “It tastes like beer candy”, she says with a face. Me: 5/5 Velia 2/5

MOUTHFEEL: Full, thick, dense. The medium-low carbonation allows it to fully coat the mouth and tongue. Me: 5/5 Velia 4/5

OVERALL: One of the best beers I’ve ever rated, earning a rare 5/5 in my book. Velia was less impressed, giving low marks for flavor but higher for everything else, still earning it a 4/5 in accumulated scoring.