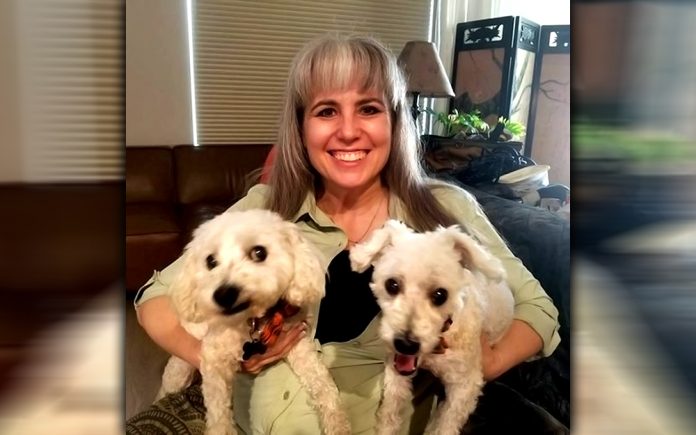 These senior brother pups endured a difficult time when their previous owner passed away inside his home with the dogs there.  The man and his frightened dogs were found several days later.  With no friend or relative able to take them, animal control officers took the animals to the Riverside County shelter in Thousand Palms.  The shelter’s rescue coordinator alerted Loving All Animals and the dogs came into their program.

Numerous adopters wanted to adopt only Yankee or Doodle, but the loving bond between the two convinced the shelter staff to keep them together.  It was a long journey to get the right home.  They had the “look” many adopters sought, but people backed off upon learning their age or the requirement they go together.

Eboni Strader fostered the pair for a while.  Then they were adopted and returned.  The dogs became a fixture at the shelter, now approaching 10 years of age.  A medical evaluation indicated Doodle had muscle atrophy and lameness in a back leg requiring medication to ease his discomfort.  In a competitive spirit he kept pace with his brother.

Corrine was looking for two older dogs after her dogs passed away.  She sought out the hardest to adopt dogs when visiting shelters.  Her two previous dogs, Chica and Amiga, were senior Beagle puppy mill survivors with medical issues.  Corrine visited Yankee and Doodle several times at Loving All Animals, learning more about their behavior and medical concerns.  Instinctively knowing her intent and love for them, the dogs were thrilled when they headed for their forever home.  They could not have anticipated the adventures ahead.

Doodle is now Jet and Yankee is now named Benny, perhaps after the Elton John song. Corrine reports, “The dogs loved our recent trip to Arizona and Colorado where they made lots of human and canine friends.  They love to go on hikes, just like younger dogs!  They even get excited when we go to a nearby park.  Benny and Jet are so loving, they give people kisses like little pecks, not the slobbery kind.” 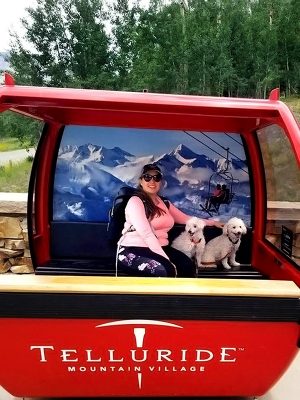 Corrine is a psychologist for the Desert Sands Unified School District with a specialty in special education.  Though trained in human behavior analysis, she also appreciates the techniques used to understand and train canines.  Corrine tells us, “The dogs quickly took ownership of my home.  However, I had to eliminate their lengthy barking at guests.  It takes time and patience working with a new dog at your home.  Benny and I took an obedience training class at PetSmart to help with the separation anxiety he has when I leave the house.  They were well behaved when I got them, but with time and training the dogs are doing even better.”

This happy adopter tells everyone who meets Benny and Jet to go to Loving All Animals when they are ready for a new dog or two.  Contact Loving All Animals at (760) 834-7000 and www.lovingallanimals.org.  Not all their animals are listed on their website as they may not be medically ready for adoption.  Some are at their Coachella shelter and others are in foster homes.  Call ahead to make an appointment, and if you seek a type of dog they don’t have, their friendly staff will direct you to another shelter or rescue.

Corrine explains, “I gravitate to the dogs that are unwanted.  It feels so good to watch them transform when I bring them love and joy. I know I’m contributing to the time these precious beings have left on the planet.  The dogs had their geriatric panel done recently at Desert Dunes Animal Hospital.  Not only are they happy in their new home, but their blood work showed they have good health.”   Benny and Jet’s message is TAKE A LOOK AT THE UNDERDOG NO ONE ELSE WANTS TO ADOPT AND EXPERIENCE THE JOY THEY BRING YOU.