This is the time of year when the studios release some of their BIGGEST films – not just in scale or budget but also in ambition.  Three films currently playing are worth a trip to the neighborhood cinema’s best venues to experience the richest sound and sharpest projection of these state of the art movies that are all pretty much guaranteed to thrill and deliver maximum enjoyment.

Keanu Reeves returns (for the third time) as super-assassin John Wick in Chad Stahelski’s terrific, action-packed adrenalin infused thriller that has Wick on the run after killing a member of the international assassin’s guild (who are apparently unionized!).  Now, with a $14 million price tag on his head – Wick’s the target of hit men and women everywhere. 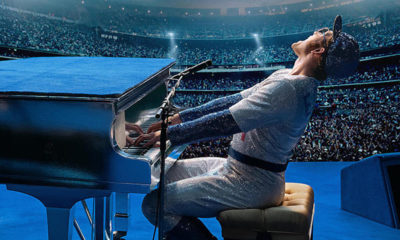 Director Dexter Fletcher who took over the directorial duties of Bohemian Rhapsody after Bryan Singer was fired delivers a wonderfully entertaining and uplifting tale of a small-town boy who makes good.  Here, working from Lee Hall’s inventive and taut screenplay he almost reinvents the storytelling formula of the genre.

Arguably, Rocketman is a better movie than Bohemian Rhapsody, which was weighed down with its PG-13 rating. Rocketman is a strong R, which allows for the warts-and-all confessional tone of this uniquely human story.

Taron Egerton is terrific as John.  The movie is almost a historical document.  But mainly it’s an explosion of aural and visual fantasy that mixes times and places (and facts) with a graceful artistry that is an exhilarating and often joyful wonder.

Witness the fantastical rise (and near fall) of shy piano prodigy Reginald Dwight to the extravagant extremes – including temptations and pitfalls — of international stardom and pop culture.  The movie’s set to John’s best songs – performed by Egerton.

GODZILLA: King of the Monsters

Beginning in 1954, there have been 35 released Godzilla movies.  It’s the longest running movie franchise.

However Toho and Godzilla junkies (do they have a nick name?) only considers the live-action films it produces to comprise the true and authentic numerical entries in the franchise.  It excludes the Hollywood adaptations and animated films from the official numerical order. 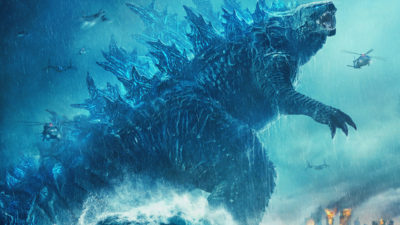 Michael Dougherty’s new reboot follows the heroic efforts of Monarch, the crypto-zoological agency as its members face off against a battery of gargantuan monsters, (or Titans as they are called) including the mighty Godzilla, who collides with Mothra, Rodan, and his ultimate nemesis, the three-headed King Ghidorah.  When these ancient giants, thought to be mere myths, bubble up from the depths they all fight for supremacy, threatening humanity’s existence.

Dougherty equivocates on whether to dazzle us with the immensity of the action scenes or to guilt us for the environmental hubris of our species.

However, like all kaijū movies, the only requirement is awesome monsters, epic fights and a just dollop of social commentary.

I was impressed with the thundering sound design, in the final battle during the last act of the film.

The new Godzilla is big dumb fun, but a disappointing follow-up to the 2014 reboot.

Make no mistake, the requisite over-the-top action and monster destruction spectacle is all entertaining for the right reasons and the disappointing plot and dialog are also entertaining, but for the wrong reasons.

At times, the movie made me think I was watching a David Attenborough nature doc on steroids.  See it on the biggest screen you can find.

A STAR IS BORN ENCORE 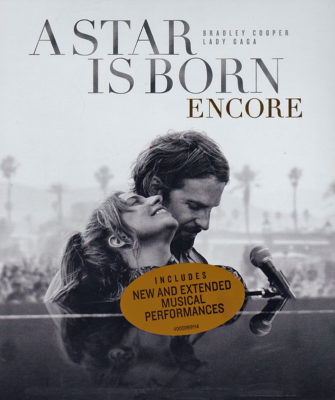 This extended cut of the award wining film features about 12 minutes of additional footage, including new and longer musical performances of such songs as opener “Black Eyes,” “Alibi,” and Lady Gaga’s Ally in her impromptu a capella performance of “Shallow,” which received the Oscar for Best original Song at the 91st Annual Academy Awards, following Cooper and Gaga’s moving performance during the ceremony.

Fans will also be treated to never-before-seen footage of Ally singing to Jack “Is That Alright?” in the wedding sequence, Jack in his studio singing “Too Far Gone,” Jack and Ally writing a new song together, titled “Clover,” and much more.  The Blu-ray Combo Pack includes a DVD of the theatrical cut.  Warner Bros.