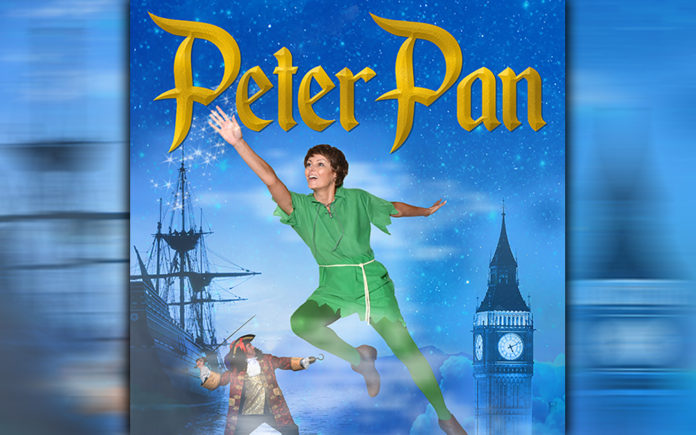 To truly appreciate fantasy, one must suspend disbelief.  Throw caution and critical thinking to the wind and sacrifice realism and logic in exchange for experiencing the joy of magic and imagination without bounds.  Normally these are the expectations in theatre where a whole world transpires upon the stage within a very short period of time.  Children grow old, or not, they fly with the aid of magic fairy dust or they outsmart evil pirates who are being pursued by crocodiles.

Such is the world of Peter Pan, originally created by Sir James M. Barrie in 1902 and later in 1954, adapted as a musical by Carolyn Leigh, (lyrics) and Morris ‘Moose’ Charlap, (Music).  Additional music by Jules Styne, additional lyrics by Betty Comden and Adolph Green.

Palm Canyon Theatre, has undertaken the most recent production of this magical show, Directed and Choreographed by the multi-talented SE Layne whose skills allow this classic show to fly to new heights.

It is sometimes a challenge to pluck a single notable performance from the midst of such a large and engaging cast, but without doubt, Kellee McQuinn’s portrayal of Peter Pan was mesmerizing and truly awe inspiring.  The show began a little slow, introducing multiple characters during the doldrums of putting the children to bed. But when Peter Pan, (McQuinn) flies through the window the audience is immediately captivated.  And fly she does, literally, with the aid of fairy dust and a few invisible wires.  McQuinn’s charming and charismatic portrayal of the boy who refuses to grow up, is enough to completely suspend all logic and inspire you to take that trip to Neverland. 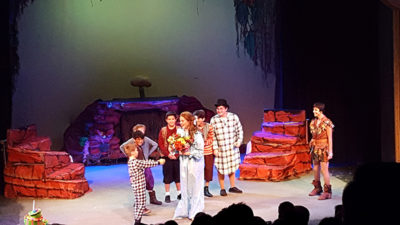 The story of Peter Pan and the lost boys of Neverland has had many incarnations on stage, film, books and through music.  It has never been a story that I found of particular interest as a child or as an adult, I always wondered why the only little girl, Wendy, had to take on the adult role, so that the boys could continue to be unencumbered and taken care of?  But if you allow yourself to let go of your critical thinking, and just accept that a single spot of light, dancing across the stage is an actual fairy, then Tinkerbell becomes as real as any other character, and imagination takes flight.

The live music that is a mainstay of Palm Canyon Theatre, is always one of my favorite aspects of any of their shows. Musical Director Jaci Davis, (Piano), David Bronson (Drums,) and Larry Holloway, (Bass,) are truly amazing in their ability to create a musical ambiance that enhances the magic of any show.

J.W. Layne’s set design was absolutely beautiful.  And no doubt that Derik Shopinski is one of the Desert’s most gifted costume designers, but in this show, it’s his performance as the crocodile, perpetually in pursuit of Captain Hook, that really garnered my attention.  The use of a car ‘creeper’ as a prop that allowed the crocodile to skillfully navigate across the stage was brilliant.

If you are a fan of Lost Boys and Fairies and Pirates, sprinkling fairy dust and flying off on adventures, then Peter Pan, is definitely the show for you.

Peter Pan, is running through September 29th.  And Palm Canyon Theatre’s season line-up includes several not to be missed, classics.