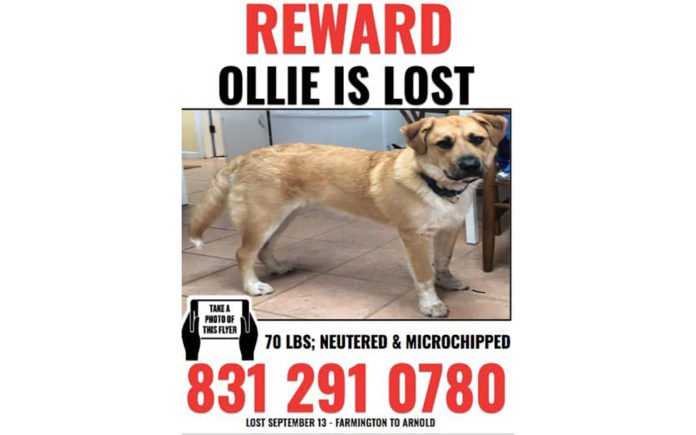 The search for a missing 10-mo-old puppy named Ollie spanned an incredible 200 miles from Aptos to the town of Angel’s Camp.  Ollie’s humans, Jake Stamp and Logan Fordham, were on vacation on the East Coast while a friend watched Ollie.  On September 13, the friend took Ollie and two other dogs on a road trip to visit someone in Angel’s Camp, stopping only once for gas in the tiny town of Farmington.  Apparently, the dog jumped out of a rolled down window although the friend does not know where.

Ollie’s distraught humans booked a flight to return home immediately.  It was a dog lover’s worst nightmare, and the vast rural area made the odds of finding Ollie very ominous.  Surveillance video from the Farmington gas station showed Ollie still in the vehicle when it left there.

Jake and Logan did everything imaginable to find their beloved Shepherd Lab puppy.  They spent the next 8 days staying in motels, combing rural roads and fields, posting and handing out flyers everywhere they went.  They posted Ollie’s story and photo on Facebook where a local news reporter spotted it and contacted the couple.  They told Ollie’s story on the television news pleading for the public’s help.  Thousands shared the news station’s video and Ollie’s Facebook post.  People pitched in to post over 1,000 flyers in the community.

Jake reports, “Not a single business said ‘no’ to putting a poster in their window.  We were heartbroken, but the support from so many people in the community was amazing and we are very thankful.  We are incredibly touched by the outpouring of support.  We gave flyers to homeless people who were also extremely helpful.”

On September 21, after several false leads, came the phone call, “I’ve found your dog!”  A woman near Farmington recognized Ollie from the flyers when she spotted him in an orchard.  The friendly dog came when she called his name.  There soon was a jubilant reunion.  However, Ollie lost 12 pounds during his ordeal, and he required surgery to repair the broken femur in one of his back legs.

Countless dogs go missing every day.  It’s heartbreaking not to know how they are, whether they are hungry, injured, or even if they are still alive.  Ollie’s story reminds us to involve social media, include as many people as possible, and DON’T GIVE UP.  Here are some tips should your dog ever go missing.

CREATE A FLYER  – Not computer savvy?  Find a young person to help.  Boiler plates to make flyers with your dog’s photo are available on www.bestfriends.org or www.petbond.com.  Put up flyers on bulletin boards including Starbucks, vet clinics, animal shelters, and on telephone poles.  Pass out flyers to postal workers, gardeners, utility workers, tree trimmers, and others who work outside.  Keep flyers simple like the one Jake made for Ollie, and offer a REWARD.

GO DOOR TO DOOR IN YOUR NEIGHBORHOOD – Lost dogs that are friendly often end up in a within a 20-block radius from your home.  Go door-to-door in the immediate neighborhood.  Check backyards, vacant homes, fields, schools, businesses, and underneath cars.  Children are often a good source of information about stray pets in their neighborhood.

CHECK LOCAL ANIMAL SHELTERS – Go in person to your local public shelter since you are the best one to recognize your pet.  All shelters check for microchips and ID tags, but sometimes these get lost.  Return to the shelter every few days.  Look in the kennels, search the “Found” book, the “Dead” book, and fill out a lost report at the front desk.  Check with private shelters and rescues.

CONTACT THE MEDIA – Check to see if local television and radio stations have programs to help with missing dogs.  Post a notice under the “Lost Pets” section in local newspapers such as the Desert Sun and Penny Saver.  Continue to check the “Found Pets” column.

DON’T GIVE UP! –  Most missing pets are returned to their owners within a short time.  Others come back home weeks or months later.  Some that are microchipped turn up years later in shelters thousands of miles away.  Unneutered male dogs are much more likely to run away, and this is yet another reason to sterilize your pet.