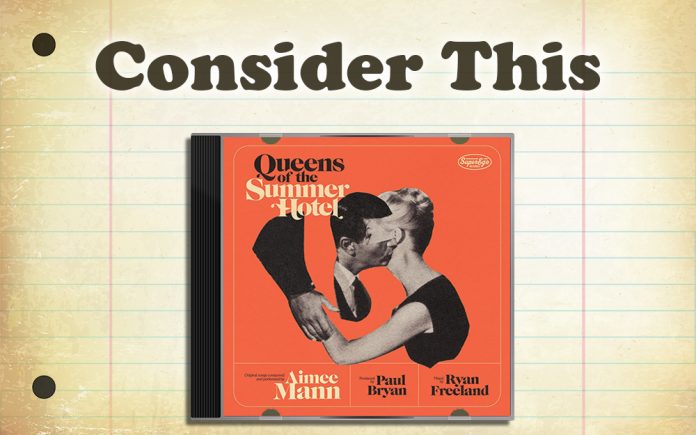 No one walks the tightrope between melancholy and melodic like Aimee Mann. Maybe Sufjan Stevens comes close, or the guy that fronts the band Eels (his name is Mark Oliver Everett, but you knew that). But Aimee always manages to tap a reserve of sadness and wrap the ache up in her pluperfect brand of gossamer Guitar Pop.

Born in 1960, Aimee endured a turbulent childhood (she recently disclosed that bitter custody issues left her with a form of P.T.S.D.), music provided some much-needed escape. Punk hit during her adolescence, and she was drawn to artists like David Bowie, Iggy Pop and Patti Smith. She attended the prestigious Berklee College Of Music, dropping out to join a Punk band called the Young Snakes.

By 1983 she formed and fronted ‘Til Tuesday. Signed by Columbia Records, the band’s debut, Voices Carry, arrived in 1985, buoyed by the title track, a sweet and sour New Wave/Synth Pop single that touched on issues like domestic violence and emotional abuse. Two more Tuesday albums followed, but the label had a tough time marketing them and the band broke up in 1990. Rather quickly, embarked on a solo career.

Although her first couple of solo efforts, 1993’s Whatever and 1995’s I’m With Stupid garnered rave reviews, label woes, first at Imago, and the Geffen, continued. She might have been consigned to one-hit-wonder status had she not created a series of indelible songs that intrigued acclaimed filmmaker (and good friend) Paul Thomas Anderson, who went on to write the movie Magnolia based on those songs. The eventual soundtrack catapulted Aimee into the spotlight, the single, “Save Me” was nominated for an Academy Award and a Grammy award. The experience completely jump-started her career.

Fed up with record label tsuris, she took control and created her own label, SuperEgo Records. In the ensuing years she has released a series of amazing albums beginning with Bachelor No. 2, and continuing with Lost In Space, The Forgotten Arm, @#%&*! Smilers and Charmer. She’s also recorded a live effort, a Christmas album and formed a duo, the Both, with Punk Rock stalwart, Ted Leo. Her most recent album, 2017’s Mental Illness won the Grammy for Best Folk Album.

Recently, Aimee was approached to write music for a stage adaptation of Susan Kaysen’s memoir, Girl, Interrupted. The book detailed her 1968 stay at McLean Psychiatric Hospital. Already the basis of a film starring Winona Ryder and Angelina Jolie, the show aimed to hew more closely to the book. Taking the ball and running with it, she quickly completed 15 songs, well ahead of the play being written. Unfortunately, thanks to (you guessed it), the pandemic, the show is now in limbo. So, Aimee opted to release it as Queens Of The Summer Hotel. The album’s title comes from an Anne Sexton poem. Familiarity with Susan Kaysen’s is not a pre-requisite for enjoying this record.

The album opens tentatively with “You Fall.” Glazed piano notes are bookended by thumping upright bass shivery strings and a trap kit beat. It’s all so diffuse and stylish, you can almost hear the cocktails clinking at some swank, late ‘60s cocktail party. The minor key melody suits Aimee’s conversational tone, clearly a topic of gossip and speculation, she dispenses with pretense and addresses the elephant in the room; “I know what you think, this never could be my fate, as you’re sipping and signaling to your date.” As a lissome woodwind section shadows her tender contralto, she alludes to her recent shock therapy; “They don’t give you a lot, but you’re sure it’s enough, cause God help you if not, you’re not calling that bluff, you’re strong, but Lord, who’s really that tough, you’re not made of such unbreakable stuff, so you fall, bit by bit, you fall.”

In a recent interview, Aimee alluded to the plight of women her age, traumatized by growing up in the late ‘60s and early ‘70s. “When it was understood that women were stupid…the conventional wisdom was that women talked all the time, that they were bad drivers; that if they were unhappy in their marriage, it was because they didn’t accept literally what nature had destined them for. And so, you can’t make a fucking mistake, because the mistake is immediately going to be attributed to your gender. They create a box and then put you in the box so the box can control you.” Women are still considered second-class citizens, but it was significantly worse during the final vestiges of a patriarchal era captured with ruthless elan by the Mad Men series. Several songs here speak to that gender-specific disconnect. Sung from a penile point of view, both “Little Chameleon” and “Give Me Fifteen” simply drip with condescension and casual misogyny. The former is powered by rippling piano glissandos, swoopy strings and swoony harmonies. Lyrics damn with faint praise, cavalierly addressing a woman as a Chameleon or Magpie, essentially mistaking coping mechanisms for character defects; “Little miss patchwork you stitch and you glue, til standing before you is what you call you, who knows how it feels or even if it does, or if you ever were, or it ever was.”

The latter is written from the perspective of an arrogant psychiatrist who doles out electroshock treatments like lollipops. Cascading piano chords lattice over willowy strings, plucked upright bass notes and a rat-a-tat beat. The jaunty melody almost belies the smug and superior idee’ fixe that the Second Sex is somehow inferior; “Ladies can you hear me, you come in here looking like some hippie chick, some Bolshevik, it doesn’t even faze me, cause there’s a couple boxes, self-appointed foxes put the chickens in, you’re feminine, you’re crazy/Give me 15, give me 15, give me 15, I’ll evaluate a lady at a glance, with only 15, only 15, only 15, you’re committed for the crime of lacking pants, Women who complain about the time their seen, sing a different tune when they’re on Thorazine, so give me 15!” Eeesh.

A few tracks employ a graceful Waltz tempo to cushion the lyrical sturm und drang. Take “You Don’t Have The Room,” cooing cello partners with swaying violin, plunky piano and a high-hat kick. An inner-monologue unfurls, slyly implying that the fairer sex better have a fair complexion, or navigating the world becomes even more complicated and discriminatory; “You don’t have the skin to bend the rules, the world will gladly suffer whiter fools, and when they screw up, they justify a second chance so they can try again, running up a tab they’ll never see, becoming what you’ll never be/Your parents said of course they always knew, they must have been fools to count on you, but you don’t have the room, you don’t have the room.” Moodily elegant woodwinds flutter on the break, underscoring the fungible fragility.

Jangly guitars and a see-sawing string section tangle on “Burn It Out.” Brittle bass lines, painterly piano and a thwoking beat are folded into the mix as lyrics attempt to assuage the barrage of bad thoughts; “Ghostly intruders who storm the moat, black-booted looters lay knife to throat, can’t you just burn that out? All of the shame that was yours to bear, will it ignite like a signal flare, can you just burn it out?” Sometimes self-harm feels like the only way to excise the inner-demons.

Meanwhile, “Robert Lowell And Sylvia Plath” namechecks two of McClean’s best-known, um, alumni. Woozy woodwinds wrap around burnished piano, thrumming bass, sparkly percussion and a shuffle rhythm. The well-known poets spent time at the facility at different times in the mid-20th century. Robert died from natural causes, Sylvia by her own hand. The song’s narrator can’t help but compare her plight to theirs; “Robert Lowell and Sylvia Plath, paint and plaster stripped down to the lath, one now broken one now dust, victim of mental wanderlust… and what’s to become of me? What am I doing here?”

The more harrowing the tale, the lovelier the melody. This is especially true of “In Mexico,” “Suicide Is Murder” and “You Could Have Been A Roosevelt.” Aimee’s matter-of-fact mien mirrors this South Of The Border tale of marital ennui on “…Mexico.” Sour strings are matched by dour piano runs and a gorgeous brass fanfare. Clearly there’s trouble in Shangri-la; “Every Eden has its price, here you have to pay it twice, servants bring me beans and rice, but there’s snakes in every paradise/cause I’m shooting speed, that’s what I do, when I can’t get what I need from you, in Mexico, in Mexico.” The lyrics’ unflinching honesty is augmented by a combo-platter of Mad Hatter piano and sylvan strings on the outro.

“Suicide…” opens with churchy piano flourishes, celestial cello and a click-clack patty-cake beat. Lyrics make the case that killing yourself is a homicidal act, “motive, means and opportunity” add up to a “premeditated, rehearsed tragedy.” It also advances the theory that suicide inflicts the most pain on those who are left behind; “But beware, cause anyone who knew you will be cursed and part of them will also die, there’s no end to the asking of the question ‘Why?’” It’s a stinging indictment of a selfish act.

Other interesting tracks include the dreamily hypnotic Samba of “At The Frick Museum,” which actually references the Vermeer painting that inspired the book title, Girl, Interrupted. Then there’s “Home By Now,” a pervy piano ballad that casually alludes to an incestuous father-daughter relationship; “My daddy loves me, he’s my Liebchen and I’m his eine kleine Frau.” Both “Checks” and “Checks (Reprise)” act as musical sorbets, cleansing the aural palate between main courses. The former is a quick O.C.D. mantra, the latter, a tart instrumental.

The final two songs act as a sort of denouement. “You’re Lost” blends strident piano notes with whispery strings and a sturdy beat. Lyrics limn the frightening sensation of being held captive by your own thoughts, the labyrinthine wordplay is close to (Elvis) Costelloesque; “A pill on your tongue dissolving, an egg out of its shell, a puzzle that no one’s solving at the bottom of a well, what could you bring that would un-ring that bell?”

Finally, “I See You” offers some emotional rescue. A loping lullaby cocooned in wistful strings, pliant piano and a tick-tock beat. Lyrics throw a lifeline that answers the unspoken S.O.S.; “There is a girl up in her bed, blade against her skin, I see you, hoping the pain covers the dread, keeps the secret in, I see you.” Fluttery piano and soaring oboe on the break, give the arrangement a Bacharach heft that momentarily allays the angst. The final verse is a semaphore that cuts through the fog of sadness; “People get crushed and broken, people lose and they grieve, but I see and I believe, I see, and I believe,” that ends the album on a hopeful note.

In 1968, the exact year Susan Kaysen was hospitalized in McLean, some smarmy ad executive came up with the phrase “You’ve Come A Long Way, Baby” as a way to cigarettes marketed exclusively for women. Apparently, having a feminine brand of cigarettes was just as cool as securing the right to vote. In the last half-century, women have certainly made some strides. But as Aimee coolly notes on this brilliant record, the more things change, the more they stay the same.