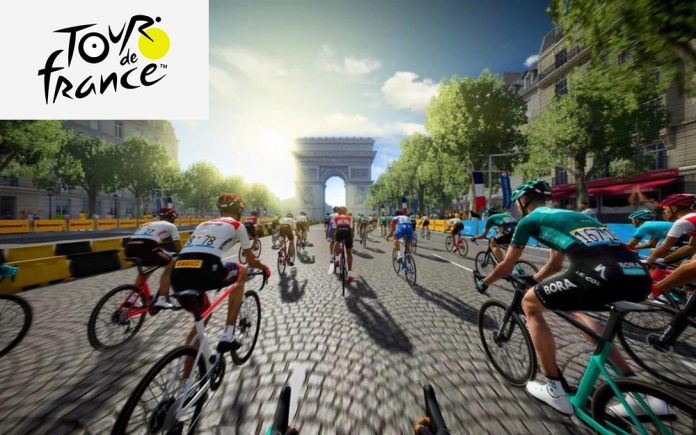 The Tour de France has become regular annual coverage in this column—and rightly so.

Many of us enthusiasts began our vino love affair with that bottle of Bordeaux, Burgundy, Champagne, Beaujolais, and/or Loire Valley wine. As a result, we’ve always found an interest in the Tour de France in its dynamic sporting circuit that often runs along the paths of the famous vineyards. So much so, that most of us will catch the TV coverage with our favorite French wine in hand.

Catching so many beautiful French countrysides, cities, rivers, valleys, forests, mountains—and famous vineyards, while watching a barrage of bike riders speed throughout, for most of us, it gets our travel bug out and itching to go!

As of late, it’s been the practice of La Tour de France to begin the first few stages, of the race in another country in Europe—La Tour is indeed an international sport with 180 or so participants from all around the world.  This year the La Tour began in Copenhagen.

And such a connection is clear: More than a hobby and a means of transport, cycling is a way of life in Denmark. They ride to school and work; They ride to the beach and ride in their spare time. In Denmark, sometimes you’ll even find princes and prime ministers often on a bike.

Nine out of 10 Danes own a bicycle; there are more bikes than people, and there are approximately 12,000km of bike routes and bike lanes across the country. They define their urban spaces and the way that they move about in cities like Copenhagen, the country’s capital. Thanks to the 673,000 bikes in the city and the fact that 44% of all trips to places of work and education are done by bicycle, it’s no wonder that Copenhagen has been named the world’s best cycling city.

Further, it was a treat to watch on the screen the wonderful sights Denmark has to offer which included a sprint on one of the longest suspension bridges in the world that connects North and South Denmark.

We are catching the live event (albeit DVR’d for our morning viewing) on NBC sports/ and the USA Channel.  Of the seven American athletes racing, Quinn Simmons is doing a live podcast from the race—indeed as he’s racing, #ASKQUINN.

Throughout the 109 years of La Tour’s three week race, the travel course has included so many of the regions of France. This year’s Tour de France highlights the eastern half of the country, totally avoiding the regions of the west. Je ne sais pas—dunno why, but the race is passing through six of the main upland or mountain areas of France.  And as we drove some well-traveled La Tour routes, in the Lower Alps, from Burgundy to Nice three years ago, it brings our wonderful and scintillating trip back fresh to our minds.

Euro-travelers—and no doubt travelers of any kind, find the La Tour de France coverage a true breath of fresh air.

Some historic names and places:  Stage 4 of the race began in France’s most northerly city: Dunkerque—or as we spell it: Dunkirk.  What a treat to see the sights up there.  Stage 7 is in the Ardennes; Stage 8 in the Vosges; Stage 9 in the French and Swiss Jura Mountains; and, 9 through 11 grapple with the traditional difficulties of the Alps.

So—as is our custom, we like to highlight some of the famous wines that are produced in the regions that La Tour de France races around and through.

As mentioned above, the La Tour courses take place in the east and south of France.  We’ll probably cover southern French wines next time, but for now, when you think about the eastern half of France, you’re thinking Burgundy.

You loyal readers may remember our trip to Burgundy in 2019 and my follow-up article on our stay in Beaune and our tastings of Pinot Noir.  When we were there, I thought about the hot weather we enjoyed and that it would reflect on the quality of the wines.  Well—the 2019 vintage in Burgundy delivered stunning Pinot Noir, but unfortunately, they are selling at record prices.

For you lovers and collectors of world class red Burgundy, the 2019 vintage match the 2016s, 2015s, and the 2005s as to astounding quality. For us regular folk, if you find a reasonably priced red Burgundy from any appellation—buy it and taste the nectar of the gods.

Many of you enthusiasts know that when Napoleon took the Burgundy vineyards away from the Catholic Church, he divided the lots to the local families.  Now fast forward 200 years—and currently, we find so many of those original vineyards have been divvied up to scattered generations of those families.  The result is that the vineyards have been shrunken to minimal acreage.  Rarely, do you now find family vineyards producing over 350 cases!  That’s why the exorbitant prices.

And now, one of the most highly rated red Burgundy wines of the vintage at 97 points: 2019 Domaine Faively Echezeaux En Orveaux. ($400 release price; around $1200 to get a bottle to Palm Springs.).  First off, how about pronouncing the wine!  Isn’t it fun to say Eh-zhay-Zoo-ohn-Nor-voh!

Anyway—only 260 cases were produced and only 15 cases were sent here to the U.S.  So, chances are, I won’t be getting a sample bottle to taste.  But here is the review by Wine Spectator magazine: “This red is silky, complex, and very expressive. It delivers black cherry, blackberry, sandlewood, spicy oak and mineral flavors, while the well-integrated structure lends support.  The discreet oak element lingers with vanilla and toast notes.”  Well—here’s a toast to La Tour de France—Bravo! & Cheers!