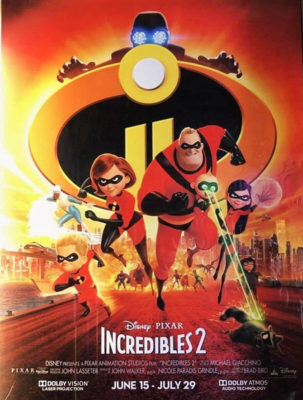 Writer director Brad Bird’s latest iteration of the beloved super hero Parr family is by far the most entertaining and satisfying family film now showing on the big screen.

It’s been 14 years since we last spent time with Mr. Incredible (Craig T. Nelson) and Elastigirl (Holly Hunter) – but make no mistake, it was worth the wait.

There’s still something hugely appealing about a middle American family who lead secret superhero lives. A nice touch here is the female-centric emphasis. This time around, the story centers on Elastigirl with special attention on adolescent daughter Violet (Sarah Vowell).

This new chapter picks up where the first left off as a humongous drill operated by nicely name Underminer (John Ratzenberger) breaks through the pavement in order to spread havoc in Municiberg.

There to stop him are the Incredibles, but the civic authorities don’t welcome all the destruction they create and ban superheroes.  This act forces the Parr family (Bob, Helen, Violet, 10-year old Dash and baby Jack-Jack) into a kind of witness protection situation at the Safari Court motel until they’re thrown out and forced to face what to do with the rest of their lives.

I loved the gender twist with Mr. Incredible taking on child rearing while Elastigirl goes after evil genius Screenslaver who can hypnotize anyone who even glances at it’s image. This relevant and timely issue is all the more meaningful today, in spite of the unintended ironic concerns by some that certain scenes may cause a kind of epileptic (?) black out or seizure – although none have been reported.

Michael Giacchino’s jazzy score is a perfect compliment to the visually spectacular animation palette.  Don’t miss this energizing, empowering film for all ages. 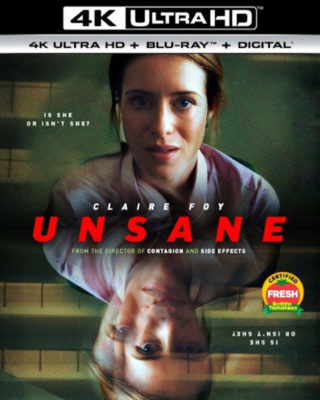 Claire Foy is young woman who is sent off — and confined — to a mental institution without her consent. At first it seems as if everyone is trying to protect her since her horrific visions and paranoia of being stalked has impacting and confounded her life. But is this woman’s subjective delusions an objective reality? The terrifying conundrum sets in motion a chain of events that no one could possibly anticipate. Steven Soderbergh’s unexpected and unsettling new psychological thriller will grab you and slam you to your seat. I was galvanized.  The taut screenplay by Jonathan Bernstein and James Greer is a marvel as is the masterful cinematography (on an Iphone!) and direction. Universal. 4K Ultra HD. 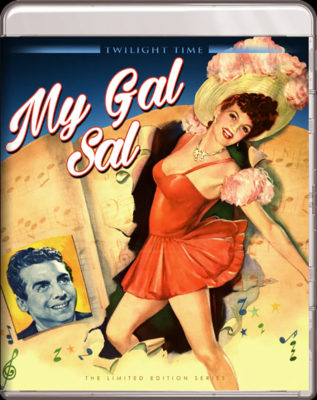 Made for each other: vintage Technicolor, the breathtaking crispness of Blu-ray – and Rita Hayworth! She is the glittering centerpiece of this popular if somewhat fanciful biomusical co-starring Victor Mature that depicts the romance of Gay Nineties songwriter Paul Dresser and a spirited showgirl. An Oscar® winner for color Art Direction. I loved the terrific choreography (Hermes Pan), great costumes and lively tunes. This is the kind of old-fashioned entertainment that marked the best of Fox’s musical of the 1940s.  Twilight Time Movies. Blu-ray. 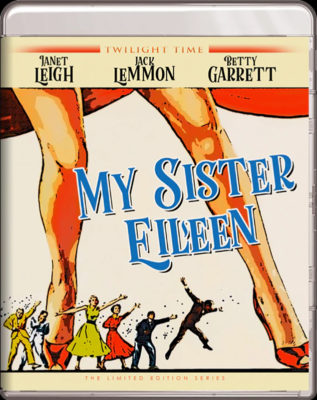 Hollywood’s second take on Ruth McKenney’s delightful and timeless New Yorker stories about her and her sister’s Greenwich Village misadventures features a crackerjack cast and dazzling Bob Fosse choreography in widescreen Cinemascope splendor! It’s a revelation to see Betty Garrett, who rarely got a starring role, as the funny, knowing, exuberant Ruth. Janet Leigh is perfect as beautiful Eileen and Jack Lemmon delivers as the randy publisher and suitor.  Twilight Time Movies. Blu-ray. 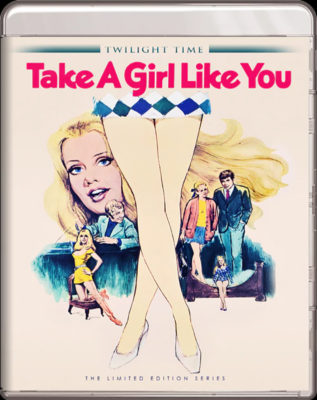 It’s about a suburban British schoolteacher as open to romance as she is committed to preserving her virginity until the time is right, which proves daunting to the fellows attracted to – and affected by – her formidable and persuasive charms.

Oliver Reed and Hayley Mills are always a pleasure to see.

This wonderfully entertaining snapshot of the late ‘60s is well worth a look. Twilight Time Movies (Limited Edition — Only 3,000 units).