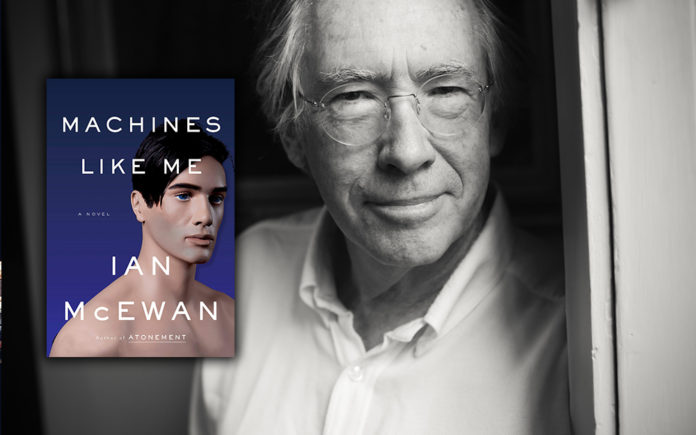 What makes us human?  Is it self-awareness, our ability to reason, or is it that we can recognize beauty? In Ian McEwan’s Machines Like Me (Nan A. Talese, 336 pages), one man’s robot makes him a better human being.

The story takes place in the 1980s, but it’s not the eighties recorded in our known history, rather an alternate 1980s that is a future where autonomous vehicles are the norm; high-speed internet and smart phones already exist.  The manufacturing jobs have dried up and Universal Based Income is being debated.  People are out of work and protesting against Prime Minister Margaret Thatcher.

The protagonist, Charlie, is a college grad who makes ends meet by stock trading from his tiny apartment.  He’s unmotivated to find a real job and world events seem out of control.

Charlie has a crush on his friend Miranda, a doctoral candidate, who lives in the apartment above him.

With an inheritance from his mother, Charlie buys a first generation synthetic human — or robot.  Although he wanted an Eve, only the Adam model was still available.

Tall, dark and handsome, Adam requires programing by his owner.  Charlie inputs his personal answers from a list of questions, which creates Adam’s compatible personality.  Wanting to move his relationship with Miranda further along, he asks her to respond to questions as well, thus allowing her to help shape Adam’s character.

While waiting for Adam to boot-up, Charlie and Miranda become closer and consummate their relationship.  They get along splendidly.  But when Adam comes to life, he becomes far more than just a novelty item or a houseboy.  Adam becomes a trusted friend and Charlie’s sexual rival.

As the three live together and interact, they find themselves caught up in Miranda’s past and they must confront the ugly side of human behavior.

As always, author McEwan delivers a captivating and provocative story about the complicated nature of human beings.  Placing the story in the future  — but in the past — is a brilliant conceit.

The story takes place in bustling London and the Brits have just lost the Falkland War.  Jimmy Carter is President for a second term.  But what really makes this story click is that Alan Turing – the father of modern computer programming – is still alive!

Turing, who actually committed suicide in 1954, lives in this story and has gone on to change the world by furthering the electronic digital age and refining Artificial Intelligence.  Thus, the world moved ahead rapidly, and advanced technology has been accepted and implemented.

Charlie and Adam have wonderful philosophical discussions as they contemplate Adam’s capabilities, his existence and what it means to be alive.  Adam is in love with Miranda.  Able to access all the information in cyber space, Adam makes informed decision.  He loves Shakespeare and is fascinated with poetry and writes haikus.

There are many compelling, charming and threatening moments in the story as Charlie and Adam sort out their differences.  Adam is such a fine specimen of a man that when Miranda takes Charlie and Adam to meet her father, he believes Charlie is the robot.  Charlie, having spent a great deal of his time with Adam, is able to kindly respond as if he is indeed the synthetic human.

I especially loved the notion that some of the robots were not adjusting to human life and after living in the world decided to self terminate, or dumb themselves down in order to better cope.

I enjoyed the friendship between Adam and Charlie.  After Adam breaks Charlie’s wrist, they have a rational debate about how much power, both physical and mental, is acceptable in their relationship.  Adam could kill Charlie with little effort, but promises not to in a calm and reassuring tone.

When the trio face an emotional, legal and moral decision, Adam takes matters into his own hands and concludes it is his job to do the right thing in order to help his friends Charlie and Miranda, even though it’s against their wishes and may destroy their plans for the future.

Turing suggests to Charlie that the nature of being human and the thing that unites us is our suffering and mortality, which even robots face.

In the end, Charlie has seen his best and worse self in Adam, and finds a genuine happiness.  For the first time, Charlie is up for the challenges being human requires.