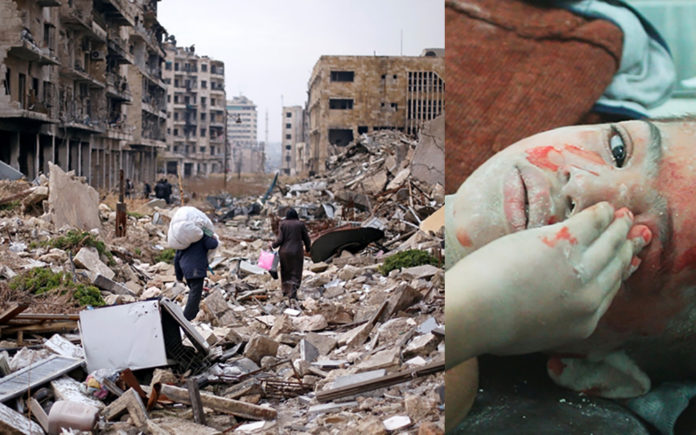 The harrowing film about the devastating Syrian civil war was shot between 2015 and 2016 when Russia’s military began to tip the battle for Aleppo (director Fayyad’s home town) in President Bashar Assad’s favor. 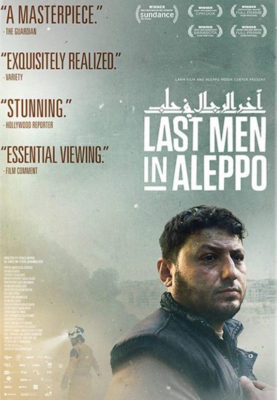 Fayyed began shooting the film himself – some of it on his iPhone — with no budget or backing when random bombing put at risk all the city’s residents.  The devastation was horrific and bloody, but brave civilian volunteers, some of whom were – and still are  — part of the White Helmets organization (officially known as Syria Civil Defence).  They faced a specific threat from Russian armaments aimed at civilian communities and specifically at White Hat headquarters.  Director Fayyad said the Russians had a clear motive for attacking the White Helmets, because they were in a position to document Russian complicity in the slaughter of civilians.

Fayyad’s film is a visceral and gut-wrenching tour of hell.

The human toll is hard to fully comprehend, even with the vivid images, some of which are beautiful in a nightmarish way – like the broad view of carpet-bombing in bright sunlight and the strange beauty of ordnance cascading across a night sky.

The pain and suffering along with the dangerous job of finding the dead or rescuing the living is a vivid reminder of the best and worst of our shared human condition. 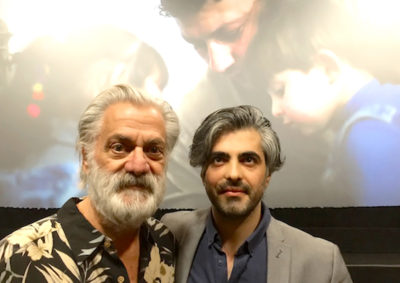 For the most part, the film follows two civilian volunteers doing their bloody work, running directly into the worst circumstances  — collapsing buildings and exploding car bombs, etc.   At film’s end, we are shocked to learn that one of the main characters we have been following has been killed.  He had an opportunity to leave Syria, but chose to stay.  His wife gave birth to their third child three months after he passed away.  The man was a charming presence during the chaos yet conflicted about not leaving his beloved home and community and raking his family to the “safety” of a Turkish refugee camp.

During the Q&A, one member of the audience shouted “Propaganda!” over the soft-spoken director’s words.  She would not stop yelling and seemed to be coming from a place that was hard to comprehend, especially after watching such an emotionally wrenching factual film.

Propaganda… for or against, what or whom?  She made little sense but was determined and continued her loud, annoying rant.  Clearly the film portrays that the citizens of Aleppo are not responsible for the death and damage to their city.  They are just trying to survive and live their lives during the horrendous civil war.

Director Fayyad said for the record, “The Russians have orchestrated a disinformation campaign to try and discredit the work of the White Helmets.  “They call them a terrorist group, American CIA [spies], to motivate the community around the world to think about the White Helmets like they are part of intelligence services.”  Fayyed adamantly says “we are not.”

In fact, the director himself was imprisoned as an artist and filmmaker.

It can be difficult to parse the politics of Syria’s civil war, but from my perspective, the film is not political or propaganda.  I didn’t come out of the movie hating Assad, but instead felt compassion for all the victims and at the same time thankful for a free press, democracy and a stable =society – for now.

Fayyad also shows lighter moments that interrupt the explosive action, as when the men celebrate at a friend’s wedding, kick around a soccer ball or play with their children at a park during a crease fire.

Fayyed said, “We weren’t thinking about ourselves — we were scared, of course. We are human. We are not machines,” he concedes. “My mission as a filmmaker is to be a storyteller.”

As difficult as the subject matter may be, this is an important film that reveals our common humanity.  This is why I always say, “Movies Matter.”

The version of “LAST MEN IN ALEPPO” that is playing in theaters has a running time of 104 minutes.  An 88-minute version is currently streaming on Netflix.