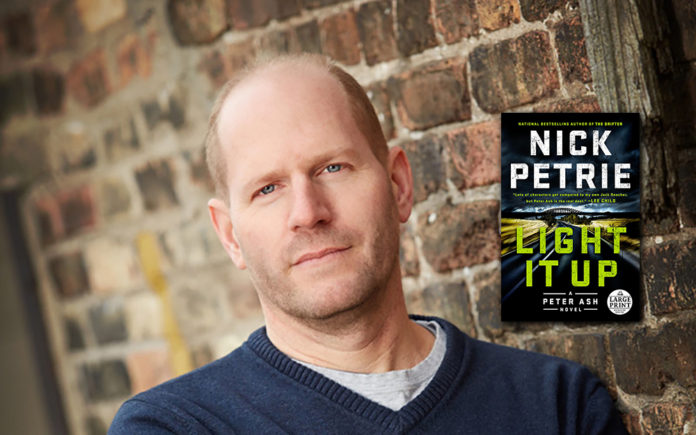 Whether you like it or not, the cannabis industry is up and running.  It is a cash crop generating over a billion dollars a year.  Until the Federal government gets on board, cannabis commerce significantly lacks banking options.   Light it Up by Nick Petrie (Putnam, 387 pages) enters the marijuana market and the dangers of moving money.

This is author Petrie’s third installment in the “Peter Ash” series, but Light it Up can be read without reading the prior novels.

Ash is a decorated veteran of the Afghanistan and Iraq wars.  After multiple tours, the former marine returned home with Post Traumatic Stress Disorder.  He is plagued with claustrophobia and a white noise that buzzes in his head.  Since back in the US, Ash can only manage to work jobs that are outdoors.   He is self-aware and is actively trying to heal himself.

After a job in a Northern California forest clearing and rebuilding trails, Ash is asked by Henry, a friend and fellow veteran, to come work for him in Colorado where cannabis is legal for medicinal and recreational use.

Henry’s daughter runs a security firm called “Heavy Metal Protection,” which moves money and marijuana.  His son-in-law has gone missing along with another security employee — and the cash!

When Ash, Henry, and two others make a pick-up, they are ambushed by what appears to be a well-planned and orchestrated robbery.  Ash and his team are out-numbered and out-gunned.   Ash survives, and kills four of the five robbers.  He also recovers the stolen money.

While the police want to know how it was that Ash was able to get away with only scratches and bruises, Ash wants to find the people who killed his friends and find out why.  He especially wants the man that got away.

Ash believes that the $500 thousand the robbers tried to take was not worth killing people over for what would be a relatively small cut.  So what were they really after?

The legal marijuana industry is still in its infancy.   Some form of cannabis – medicinal, recreational and CBD or low-THC — is legal in all states except four.  This year, Vermont was the first state in the union to legalize marijuana without a ballot initiative.

Author Petrie sets his novel in Colorado, one of the first states to make cannabis legal for medicinal and recreational use.  He wastes no time and takes the reader into the world with a quick jolt of danger and hard action.

If you have never been in a grow facility or given much thought about how cannabis businesses operate, Light it Up is an exciting introduction that exposes the opportunities as well as the dangers of operating an all cash business.

Ash is a noble and honorable character.  We root for him as he goes after the sociopath behind the deadly attack on the security firm.  He sees the bigger picture and understands there is more to the crime than what first appears.  Ash works to overcome his PTSD.  He’s smart, adept and likeable.  He kills four men while trying to save his friends, colleagues and own life.

As the story unfolds, the reader gets a clearer picture of Ash’s past and the men he fought with in the Middle East.  They are damaged people desperate to manage their lives and readjust to society after serving in war with all the entailed horrors.

The author has a way with language, and he manages to give the reader enough background throughout the narrative to keep the characters sympathetic and compelling.

The reader gets an understanding of the veterans’ skills and weaknesses, and the challenges veterans face in finding work, reconnecting with society and maintaining personal relationships.

I especially appreciated the many aspects of the cannabis business and what its future may hold.

In the story, a grower has developed a strain of marijuana that has medicinal properties that may be a cure for PTSD, but also may be addictive.  The author shares some of the challenges regarding the testing of pot under Federal law, which is currently illegal.

If you are familiar with Colorado, the story names neighborhoods, streets and locations.  I liked that the women in the novel are strong, independent and capable. It’s fun to see Ash in a new environment that is timely, fresh and dangerous.

The cannabis industry has many challenges and its future is uncertain, as the current administration has come out against it.   Light it Up adds understanding to the current complications of cannabis commerce, but most importantly it is entertaining.