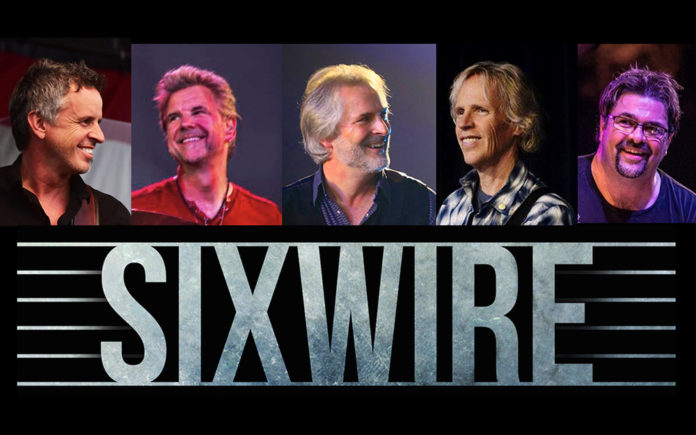 Five veterans of touring, recording, and songwriting adopted their name SIXWIRE from the six-string guitar, a fitting tribute to the instrument around which their sound is based. The band will be performing at Spotlight 29 Casino on Saturday, November 2, at 8 p.m. in the Spotlight Showroom for their All Star Jam featuring several Rock legends including Wally Palmar (THE ROMANTICS), Steve Augeri (former lead vocalist for JOURNEY), Jason Scheff (former lead vocalist of CHICAGO) and John Elefante (former lead vocalist of KANSAS). One hundred percent of proceeds from ticket sales will benefit non-profit organization Martha’s Village, one of the largest providers of homeless services in the Coachella Valley and Riverside County.

The group was formed in 2000 with Andy Childs, Steve Mandile (guitar), Robb Houston, John Howard (bass), and Chuck Tilley (drums) and would soon see chart success, national touring, and multiple television appearances. With the addition of Steve Hornbeak (keyboards), SIXWIRE continues their run of success making appearances all over the world with their Pop-Country meets Classic Rock high-energy show, while also continuing to serve as back-up band to dozens of iconic musical stars.

The friendship was formed long before the band, as Mandile recruited Howard, Tilley, and Hornbeak to be a part of singer Lee Greenwood’s touring band, for which Mandile was band-leader.

Childs, an RCA Records solo artist, began regularly opening shows for Greenwood, and another future element fell in place, unbeknownst to the five. Sometime later, Mandile, Howard, and Tilley would form an original band along with guitarist Robb Houston, who answered a cattle-call audition, but Mandile was never really comfortable with the position of frontman. Mandile had been writing songs with Childs, and convinced him to come aboard.

SIXWIRE was born, and in less than a year was signed to Warner Brothers Records in Nashville. Their first self-titled release (2002), produced by Mandile, debuted in the top 30, and spawned the chart hits “Look At Me Now” and “Way Too Deep.”

Touring followed with the top artists of that time, and included appearances with TIM MCGRAW, KENNY CHESNEY, MARTINA McBRIDE and PHIL VASSAR.

The band has performed at the Daytona 500, the NHL All-Star Game, and most recently SUPERBOWL 51, as well as being the house band for the Charlie Daniels All-Star Jam and the ACM Awards After Party All-Star Jam.

Coachella Valley Weekly reached out to the Memphis-born Childs to ask about his long-standing connection to the desert, the Warburton Celebrity Golf Tournament and his upcoming Martha’s Village benefit show.

CVW: I saw you perform several years ago at the Warburton show. You guys were awesome and have developed a large following and fan base in the Coachella Valley. What other ties do you have to this area?

Childs: “Prior to becoming music director for the Warburton Celebrity Golf Tournament, I had only visited the California desert a few times. Now that I’ve been in charge of the music for the tournament for the past nine years, I’ve gotten to know many people in the area, and I have made life-long friends there. It’s one of my absolute favorite places to visit. All of the guys in SIXWIRE love coming to the Cali desert, and we love the work we do there!”

CVW: You’ve performed with some of Rock and Roll’s greatest musicians and personalities. Looking back, what have been some of your highlights?

Childs: “Performing with Michael McDonald is certainly one of them, and working with Tom Johnston, another Doobie Brother. It’s a treat to play Eagles songs with former Eagle Don Felder, and we often play with Vince Gill, who’s now part of the current Eagles. I had the honor of being a temporary member of Little River Band for a tour or two. This year, SIXWIRE was the first ever ‘house band’ for the 2019 NFL Draft, which was held in Nashville…definitely a highlight!”

CVW: I spoke with John Elefante and he couldn’t stop singing the praises of SIXWIRE. What are your thoughts on these “all-star” shows and what makes them different from other shows?

Childs: “The show is ‘seamless’, because SIXWIRE is the only band on stage, and all of the guest stars perform with us. Each guest star comes on stage and does their biggest hits, then makes way for the next guest star.  It’s a tight, exciting show, full of all hits, by some of the greatest singers ever in Rock! John Elefante is unmatched as a vocalist…he’s also a wonderful songwriter and producer, and he’s a Grammy winner! Jason Scheff, who sang lead and played bass for CHICAGO for 30 years, will absolutely blow you away. Steve Augeri was the ONLY choice to carry on for JOURNEY for nearly 10 years, and Wally Palmar is the mainstay of THE ROMANTICS, one of the greatest bands of the 80’s. Seriously, this is a ‘don’t miss’ event!”

CVW: Do you have any more original SIXWIRE music in the works?

Childs: “Yes, and you’ll be able to hear it in early 2020. It’s an interesting time to be in the music business, because you no longer really need a major record label if you already have a following. In the spring of 2020, we’ll be releasing new music that you will be able to find on iTunes, Spotify, and anywhere else you buy or stream music. There’s a sense of freedom also in the fact that we don’t have to define ourselves as ‘Country’ or ‘Rock’…we’ll just put out music that we love making.”

CVW: Why is it important for SIXWIRE to participate in events like The Warburton?

Childs: “Charity events like The Warburton, and especially the one we’re doing on November 2nd for Martha’s Village, create an opportunity to share a message, and an opportunity for people to give from their hearts. Nothing compares to a great music event for bringing people together and impacting them emotionally, so their hearts open up as well as their checkbooks, and they realize they can individually make a difference for those who can’t help themselves. All of the guys in SIXWIRE feel very blessed and lucky to be able to do what we do, and creating unforgettable music events that benefit others is our way of giving back.”

CVW: What do we need to know about your bandmates Steve Mandile, Robb Houston, John Howard, and Chuck Tilley and Steve Hornbeak in SIXWIRE?

Childs: “That we are like brothers. We’ve all known each other since we all started out in the music business. When we’re not on the road or in a recording studio making music together, you’ll find us all hanging out together, going to hockey and football games, and hanging out in our favorite Nashville haunts. Not a day goes by that I don’t hear from one or more of the SIXWIRE guys…our lives are thoroughly intertwined.”

Childs: “We have worked with all four of them MANY times, and our shows with them are extremely well-rehearsed and tight, while still retaining that first-time energy that you feel when you work with an artist whose music you LOVE! This is a GREAT show!”

CVW: The non-profit benefitting from your show on 11/2 at Spotlight 29 Casino is Martha’s Village. What more do you feel we can do to help reduce homelessness in the United States?

Childs: “It starts at home, in our own community, in our own backyard. As Americans who all support each other and love each other, we don’t have to wait for anyone to tell us what to do or how to help…we KNOW ALREADY. MARTHA’S VILLAGE is proof of that. Here is the perfect opportunity to show your love…to show your heart.”

Childs: “Only this – COME TO SPOTLIGHT 29 CASINO on November 2! We’ll give you a show you can’t see anywhere else, full of hit songs sung by the singers who led the bands that recorded them! An evening you’ll never forget! AND you’ll be helping your community, just by coming out to have a great time!”