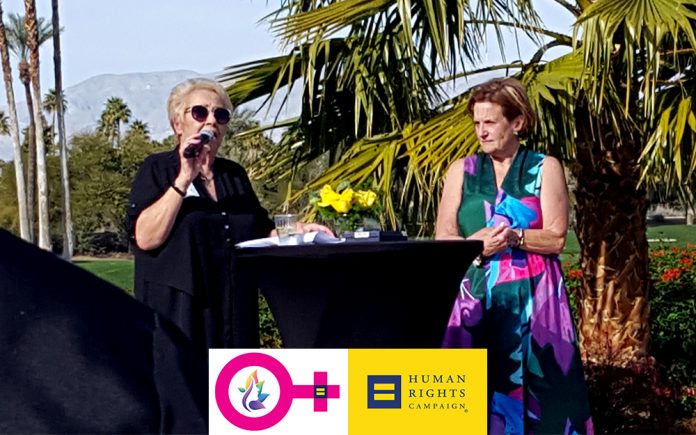 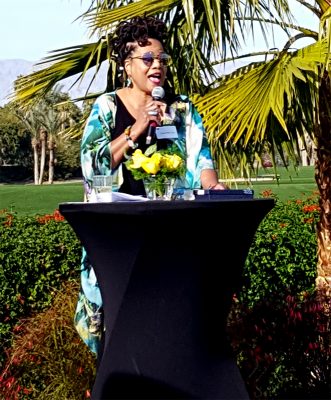 The Human Rights Campaign has been known primarily as a male dominated organization. They are striving to become more inclusive and are therefore sponsoring events whose focus is to support women, to celebrate and build a greater sense of community, as well as engaging in the LGBTQ civil rights movement.

On Saturday, February 15, the HRC presented its fourth Annual ‘Her HRC.’ This year’s event was held at a private home in the desert on a beautiful sunny afternoon that featured celebrated women, such as Palm Springs lesbian activist and former City Council member, Ginny Foat, award winning singer Jennifer Corday and the organization’s recipient of the ‘Advocate for Equality’Award, Jazz/Blues performer Sweet Baby J’ai.  Sweet Baby J’ai is a multi-faceted, critically acclaimed singer, songwriter, actress and educator, as well as co-founder of the Palm Springs Women’s Jazz Festival. Her passion for promoting the accomplishments of women in music has helped the Jazz festival grow to its present popularity and success. Sweet Baby J’ai’s work has allowed her to serve as a role model and mentor for young girls in the arts, through programs designed to build confidence, improve communication skills, critical and heightened thinking. Inspiring girls in underserved communities by providing free arts education and activities. Giving back and lifting up! 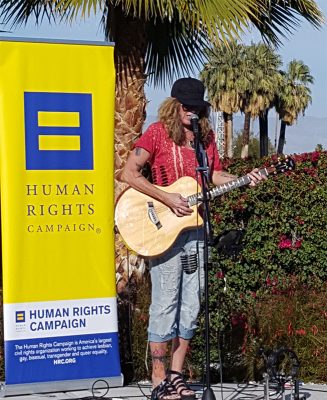 I had the personal honor of working with Sweet Baby J’ai when writing my play, “Prove It On Me.” She took on the lead character role through-out the initial staged readings, while I was working on the script and then gave stunning performances when the play opened and ran for eleven weeks at the Stella Adler Theatre in Hollywood, CA.  She is not only a beautifully talented soul inside and out, tireless in her pursuits, but is also one of the smartest people I have ever had the privilege of knowing.  Deserving of every honor she receives.

Well known Desert Activist, Lynn Hammond, was the force behind the coordination of Her HRC in their efforts to get more women involved in the desert community.

Under the Trump Administration, LGBTQ civil rights have been continuously assaulted and reversed. The Administration has systematically undone gains with rights and protections.

*They have banned Transgenders from serving in the military

*Argued in state and federal courts around the country that employers could legally discriminate against LGBTQ individuals.

*Exempted contractors from compliance with federal nondiscrimination rules that cover employment if they conflict with a contractor’s religious beliefs.

* The Trump administration’s Department of Education has drastically scaled back civil rights enforcement for LBGTQ students.

*Eliminated Obama-era regulations that prohibited discrimination based on gender identity and sexual orientation.

*Health and Human Services proposed new rules that would allow grants to be given to organizations that blatantly deny services to LGBTQ individuals.

*The Justice Department has offered briefs in courts that support business’ who discriminate against and refuse to offer services to, the LGBTQ community.

The discriminatory practices of the current administration is ongoing, which is why it is imperative to respond and push back against the onslaught of perverse policies that interfere with the civil rights of the community.  The Human Rights Campaign, seeks to improve the lives of LGBTQ Americans in the Coachella Valley by advocating equal rights and benefits in the workplace, ensuring families are treated equally under the law, and increasing public support among all Americans through innovative advocacy, education, and outreach programs.