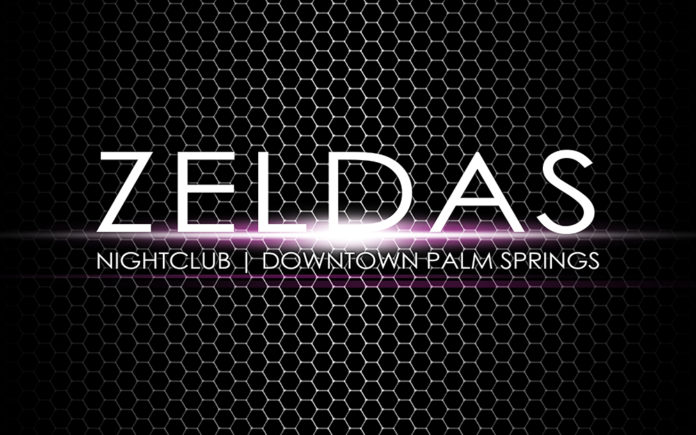 For over 40 years, the synonym for dancing and entertainment in the desert has been Zelda’s Nightclub in Palm Springs. Well deserving of receiving the honor of Lifetime Achievement Award for Venue at the 2018 CV Music Awards.

If you’ve ever gone out dancing in the Coachella Valley, chances are that you have done so at Zelda’s Nightclub in Palm Springs. Legions of club goers have traversed the doors at the legendary club, all with their own experiences and stories, most likely starting with the phrase, “I remember that epic night at Zelda’s,” or something to that effect. Zelda’s has withstood the test of nightclub time, and has come through not only still standing, but standing with a steel foundation of longevity that has insured them continued success.

The year was 1977, tight satin pants, sequined halter tops and disco was all the rage as the movie Saturday Fever had just debuted. Nightlife in Palm Springs was going through a change and needed to be delivered into the modern trend, and Zelda’s would become the messenger. The club was an instant success, as the town was ready to embrace a new style of entertainment. Original owners Harvey Izen, Roger Gibson, Gerry Masoner, Jeff Boardman and Joe Gallager were elated at the public’s response. They had created, what would become, a Palm Springs nightclub icon.

In the early 1980’s, Masoner and Boardman sold their interest in Zelda’s, and in the late 80’s, Mike McCormick became a partner when their sister club, Cecil’s on Sunrise, opened. The nightclub business was heating up with new clubs large and small competing for business, but the recipe that Zelda’s has cooked up was still feeding the hungry nightclub crowd which enabled them to survive the ups and downs of the business.

In 2002, longtime associate Rod Copeland became partners with McCormick, and they purchased Zelda’s from the previous owners. It is an ongoing perfect pairing, as the two consider one another family and have equal ambition for the club. Although they had always kept up with décor changes for the club, their desire to do some extensive remodeling was thwarted years later, when the landlord of the famous Indian Canyon address failed to make their lease long enough to warrant remodeling. As a result, they decided to relocate Zelda’s to the Sun Center shopping area at 611 south Palm Canyon in 2010. There, they were able to establish a 20 year lease where they could continue their vision of being the best entertainment venue in Palm Springs, falling in line with their motto of, “Never, Never Give Up, and treat the customers as we would want to be treated, with Respect!”

Where some clubs would find relocating from a long standing location daunting, the team at Zelda’s saw it as an opportunity, and the move has helped to re-energize the club. It is accurate to say, that it really didn’t matter where the club would move, because their loyal following of patrons, and pristine reputation as a leader in desert nightclubs, would move right with them. To help with their evolving success, are McCormick’s sons General Manager, Cody McCormick and Bar Manager, John McCormick, who elevate Zelda’s with their youth, energy and fresh forward thinking, “They have stepped up hugely this year and have helped out Rod and I immensely, even though Rod and I have a few years left in us”, says their proud father.

McCormick is also extremely appreciative of the staff member’s that have stayed the course with the club throughout the years including, Rocky Soto, Lisa Villapando and Veronica Caserez, all who have worked for Zelda’s for over 18 years.

To their benefit, they have brought on-board two hard working promoters who have helped to cultivate extremely popular weekly promotions. Ernesto Guiterrez with his Latin Nights, and Jesus Calderon-Jeezy with his Tuesday night events. And of course the talent of their music savvy DJ’s, keep their patrons bodies moving with Mario Nunez-The Bigster…DJLF and DJ Markus Area, all spinning the sounds and adding to Zelda’s nightly magic.

McCormick and his team are grateful to receive this achievement award, regarding it as a boost to creating more lasting memories for club goers at the iconic Zelda’s, “We believe with the current management, Promoters, staff and DJ’s we have the formula to reach out to all our friends,local customers and tourists, and give Palm Springs and the Coachella Valley the enjoyment and fun they are looking for!!

McCormick’s longtime friend, colleague and one of the recent picks for CV Weekly 2018 Ten Most Interesting & Influential Men of the Coachella Valley, Steve Johns, will be presenting the Lifetime Achievement Award.