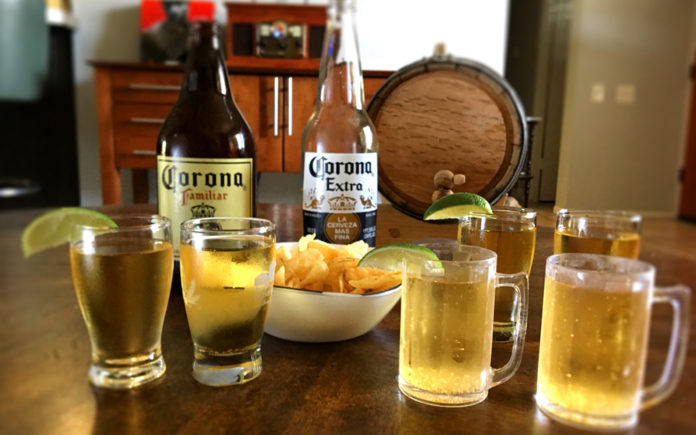 Last week’s article touched on the history of Mexican lagers, and how many of them came to be. Every commercial beer you can think of from Tecate, Sol, Victoria, Pacifico, Modelo, and Bohemia, all belong to either Grupo Modelo or Heineken México. Arguably the most popular of the brands is Grupo Modelo’s Corona brand.

First brewed in 1925 by Cerveceria Cuauhtémoc-Moctezuma, Corona was created as a German Pilsner and sold in the same clear, long necked bottles that you see today to show off the brilliant clarity and light golden color of the beer.

Unfortunately, those clear bottles are hell on the beer that’s inside them.

See, brown bottles help to shield beer from the harmful effects of the suns UV rays. Whether you get your beer from a convenience store, grocery store, or a BevMo, it’s gonna be sitting on a shelf, possibly exposed to sunlight through the glass windows of the store, and that sunlight inevitably breaks down the acid compounds present in the hops, turning them into the same musky compound found in skunk spray. Corona’s clear bottles, while useful in showing off how good that beer looks, leaves that poor beer extremely vulnerable and susceptible to being light struck.

While Corona Extra has been available in the US since 1979, Familiar doesn’t share the same familiarity stateside. The brown, squatty, 32 oz. bottles have a much more rustic and humble appearance than the blue and white, golden hued bottles of Corona Extra.

A huge debate rages among Corona drinkers about whether Extra and Familiar are even two different beers! Many swear that they are one in the same, and the only difference is its bottle.

Well, dear reader. There was only way to get to the bottom of this. I was going to have to drink both. Back to back.

Till I either unlocked the mysteries or died of alcohol poisoning trying.

I armed myself with 32 bottles of each beer, ready to undertake my daunting task. With two dear friends and my accomplices and witnesses, we set out to know once and for all of Extra and Familiar are indeed the same Corona.

Both poured with the same light gold clarity, and absolutely no difference in color. The aromas coming from both were so similar that they may have been the same. It’s when sipping both back to back, that the truth comes out. 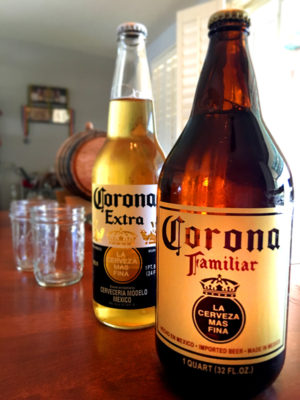 Corona Familiar has a noticeably richer and fuller flavor than Corona Extra. Maltier and with more cereal sweetness, Familiar seems to coat the tongue, giving a feeling of roundness that you’d never accuse Corona Extra of having. A sip of Corona Extra gives you a crisp and tart, barely honey-sweet flavor that ends with a vegetal taste at the back of the palate. The flavor of Extra has always ended on a distasteful note, even in the freshest bottles I’ve had (I suppose the makers are aware of the flavor flaws, and that’s why they’re always encouraging consumers to drink Corona with a lime to mask the funky taste).

Twice now, I’ve purchased Corona’s Extra and Familiar and drank them back to back, and the results have been the same both times. The flavors are noticeably different, and there’s no way in hell that this is the same beer.

There are, however, many clues that hint at the fact that they are indeed the same beer in different bottles. Similar colors and aromas, and some websites cite the same ABV of 4.6%. Many bottles of Corona Familiar wear a bottle cap with the Corona Extra logo. Many fans will tell you that the Familiar bottle is simply marketing; a throwback, vintage looking bottle meant to be shared from the middle of the table at mealtimes like a bottle of wine.

Also existing are the numbers of hints that let you know the beers are not the same. Coronausa.com lists all their beers vital statistics. Extra is listed at 4.6% ABV, with 18 IBU’s, and is touted as being a balance between heavier European import lager, and lighter domestic beer. Meanwhile, Corona Familiar is listed as 4.8% ABV, with 19.5 IBU’s, and is described as having “a slightly fuller flavor” than what Corona is known for.

That fuller flavor is more than evident when you try it for yourself. Although there is no concrete statement to be found calling Extra and Familiar two completely differ t beers, it’s clear that Familiar is a big brother to Extra.

Which of the two do you prefer? And can you taste a difference in the flavor? Feel free to find me on social media and drop me a line letting me know what you think.