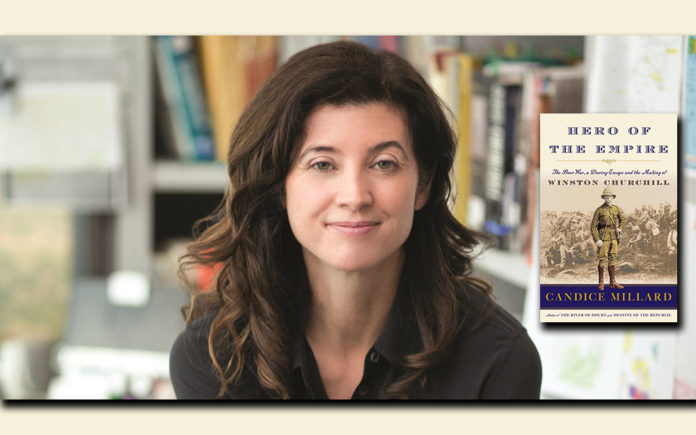 —–
Hero of the Empire
by Candice Millard
Nonfiction
—–

Do we humans each have a destiny to fulfill? Maybe we do, and maybe we don’t. Maybe for some of us, it’s just unclear what our destiny is. In Candice Millard’s Hero of the Empire: The Boer War, a Daring Escape, and the Making of Winston Churchill (Anchor Books, 383 pages), one man actively pursues his destiny everyday of his life.

My father-in-law use to say that Winston Churchill was the right man for the job at the right time in history. He marveled how great leaders emerged when they were most needed. My father-in-law served as a combat surgeon in Patton’s Third Army during WWII. He admired Churchill for his courage, resilience and his eloquence when addressing the people of the world.

Millard, a wonderful author and fantastic historian, takes the reader on a detailed journey with Winston Churchill, a man who was certain of his destiny since his first memory.

Britain is an ancient place and they have a warrior past that seems to flow in their DNA. Young Churchill believed this. At five years old, he knew he wanted to lead an army. He played with tin soldiers and admired the portrait of his great ancestor at the family’s lush Oxfordshire manor.

Coming from a low status, John Churchill, the 1st Duke of Marlborough received his title and large estate from Queen Anne for his bravery and victories on the battlefield in the eighteenth century.

Young Churchill believed that he too had to prove his courage and become a great leader and fulfill his destiny.

In his early 20s, Churchill forced himself into a battle. An aristocrat and with close ties to the royal family, he used the influence so he could join a fight in India.

Churchill participated bravely in a bloody battle against the fierce Pashtun warriors who used long curved blades to literally shred their enemies into crimson ribbons of flesh. Churchill took copious notes and wrote his mother about everything he saw and did.

Indeed, Churchill was recognized for his battlefield prowess, and he was asked to run for office, but he lost. With this defeat, he needed another war. But, he would not be granted permission to fight; rather he could only participate as a war correspondent.

The Boar War took place in South Africa between occupying European nations with religious affiliations that is so fascinatingly complex, I cannot begin to put it in a nutshell! It involves the Dutch, Germans, Huguenot descendants, slavery and British rule. It is a brutal colonial war in a country foreign to them all.

Churchill, looking for action while reporting on the Boar War for a British paper, is taken prisoner. Along with two other POWs, they plan an escape. When the time comes, Churchill finds himself going over a wall and into the woods by himself. Looking around, he realizes the other men chickened out.

As with Millard’s other books, there is so much incredible detail, the reader gets not only a sensory experience, but also a clear understanding of the events as they unfold.

Millard does an amazing job summarizing history. She answers the how and why these events took shape, which paints a vivid picture of our past.

I’m embarrassed that as an American, I don’t have a handle on the major wars fought by Europeans around the globe unless it involved the United States. I am reminded why history is so important and how relevant it is to who we are and what we are doing in the world today — no matter your country of origin.

I liked the young Churchill. I get his tenacity and I feel his bravery and desire. I did not know however, that his mother was an American heiress of Native American descent — Iroquois. This made me proud because she was a wise and stunningly beautiful woman who had a great influence on her son.

It is tremendously clear, that Churchill did indeed fulfill his destiny and rose to the occasion with the confidence of a skilled and brave warrior.

History is so exciting and fun with Millard at the helm. My only issue with Hero of the Empire is, for me, I wish Churchill’s story was told in a linear timeline. If this bothers anyone else, I suggest skipping the prologue and going right to the chapters. I think the already compelling narrative will be even more exciting.